Shreve is a town in the Midlands, a quiet town, a run down, going nowhere town, a town that’s sole mapworthy offering is the Landfill site, where humanity’s rubbish is buried and forgotten.. Out of sight = Out of mind..

There is no one main protagonist in this book.. D’Lacey starts us off bouncing from person to person, situation to situation and you’re not quite sure what’s going on for the first few chapters..

We meet Mason Brand, a former famous photographer who’s abandoned all his worldly trappings to become something of a hermit. Agatha Smithfield, sick of being a nobody and determined to leave this dead end town and move to London.. At any cost. Donald Smithfield, her younger brother, lost in the clutches of an older married woman. Ray and Jenny, a pair of stoners who actually really don’t like each other much. Kevin and Tammy, a married couple who aren’t overly fond of one another either. Richard Smithfield, who you instantly hope is going to meet a very sticky end indeed. 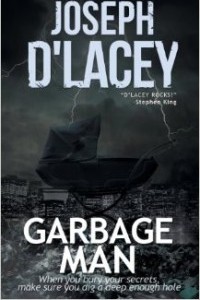 In fact, there isn’t a single character you connect with, or if there is you won’t be proud of connecting with them, they’re all greedy, selfish and self centred.. In fact that’s the whole premise.

The selfishness of humanity..
The greed..
The apathy..
The thoughtless discarding of anything no longer deemed useful or valuable..

Well enough’s enough and it looks like the shit (apologies but it really is the shit) is about to hit the proverbial fan..

Mason has been taught some ancient ways and rituals.. Means to connect with Mother Earth… Agatha wants to escape and Mason can help her, so what if she’s meant to do something in return, it was an empty promise and she’ll be long gone by the time pay back is required.

But a half completed ritual can be dangerous.. And it’s a dangerous time.. Something is out there, at the dump… And it’s becoming..

Who will survive? Who won’t? Do any of them deserve to survive? And is survival worth it in the end? I’m not telling.. You’ll have to read the book..

Joseph D’Lacey’s novels (well the two I’ve read) are nauseatingly horrific, if ever they were adapted for film, they’d be splatter horror.. But with a proper story.. With a moral.. With a warning… If you want a horror story that has a foot and a half based in reality, D’Lacey is your go to author..

I bit my nails to the quick, tried hiding behind a cushion and read some of the chapters through my fingers.. The descriptive nature of some of the more harrowing moments is truly unnerving and yet, some is still left to the imagination.. I don’t know how that’s possible but it is..

I hope it’s never made into a film!

But damn it was good..