“Blessedly, monstrously, bloatedly, cynically funny and fantastically unique. No one has ever written a book like this.”

Considered by many to be a modern classic, Catch-22 was first published in 1961 by Joseph Heller and serves as a satirical war novel that follows Captain John Yossarian, a bombardier in the United States Air Force stationed in Pianosa during the Second World War. Unlike many war novels, Catch-22 doesn’t designate the opposing force as the threat to Yossarian’s life but instead reveals how the maddening rules of war, rank, and command of one’s own side can be just as dangerous as gunfire from the enemy.

The book’s title, Catch-22, now common parlance, refers to “a problem for which the only solution is denied by a circumstance inherent in the problem or by a rule.” Forced to serve under a commander who keeps raising the minimum amount of missions required before a bomber can be sent home, Yossarian is desperate to find a way to no longer have to fly more bombing runs. Our protagonist knows that, if a man is deemed insane he no longer has to fly missions, but showing concern for one’s safety in the face of danger is deemed to be rational, and so he is sane and fit to fly. The insane people are the ones who show no concern for their safety and thus fly missions. 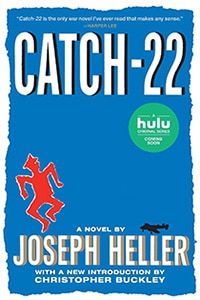 As Heller writes: “There was only one catch and that was Catch-22, which specified that a concern for one’s safety in the face of dangers that were real and immediate was the process of a rational mind. Orr was crazy and could be grounded. All he had to do was ask; and as soon as he did, he would no longer be crazy and would have to fly more missions. Orr would be crazy to fly more missions and sane if he didn’t, but if he were sane he had to fly them. If he flew them he was crazy and didn’t have to, but if he didn’t want to he was sane and had to.” Stuck in an impenetrable web of bureaucracy, Yossarian must do whatever it takes to survive the people who are seemingly hell-bent on his death, the people who are supposed to be on his side.

Catch-22 is a book that’s been on my ever-expanding ‘To read’ pile for years, and I’ve often heard plenty of praise heaped upon the novel. After reading (and loving) Vonnegut’s Slaughterhouse-Five last year, I decided that it was time for another anti-war novel. Having finished Heller’s story, I find that I am in the uncomfortable position of going against the grain when it comes to Catch-22. There are several aspects of the book I found interesting, amusing, and clever, but overall I found myself feeling frustrated by it as a whole and left wondering what all the fuss is about.

I want to begin by tipping my hat to Heller’s writing style. His use of language is sharp and there’s no doubt about the wit of the author. Perhaps most importantly, like many great writers, Heller has his own distinct style and I’m convinced I could pick out his writing just from a few lines. I also want to touch on how well Heller is able to interweave the comedy, tragedy, and absurdity of Yossarian’s story into a book that’s set during one of the darkest periods of human history. This is a feat that’s not to be understated and the last thing I intend to do is imply that I don’t think Heller is a great writer. The novel may be a satirical comedy at its core, there are still some truly heartbreaking passages that bring home the true horror of war and the desperate position Yossarian finds himself in. I didn’t need to read Heller’s Wikipedia page to know that Catch-22 is inspired by our author’s own experiences of serving in the air-force during World War II.

While there are moments of heaviness to be found, the book is also full of amusing scenarios that highlight just how absurd war really is. Indeed, it would be downright comical were it not for the senseless snuffing out of human lives. Some of the humour here is downright slapstick and includes scenarios where Yossarian attends a parade in the nude and another that introduces a man whose name is Major Major Major and is quickly promoted to Major Major Major Major, with no hope of ever being promoted or demoted. On top of this, there are many thought-provoking questions raised in the novel, and it’s intriguing to read a war novel set in World War II which never even features German soldiers. I’d never considered how reckless commanding officers can be just as dangerous to a soldier as the people he’s meant to be fighting. I was equally interested in the character of Milo Minderbinder, who establishes M&M Enterprises, and becomes obsessed with turning a profit and expanding his market, even if that means helping both the Allies and the Axis powers. Minderbinder represents perhaps the most loathsome aspect of war. Those people, companies, and corporations that make a profit from it.

There are plenty of aspects I admire about Catch-22, from its themes to its style, but I still found myself underwhelmed by the overall experience. This, I believe, is due to the fact entire chapters of the novel can flip-flop between being extremely frustrating to simply boring. It’s obvious that the book aims to give readers a sense of the frustration and boredom that people are often subjected to in the military, even in times of war, but the periods of boredom and frustration I felt reading of the novel felt too overbearing to justify the ends. As you would expect from the title, the book intends to explore the maddening Catch-22 of Yosarrian’s predicament, but all too often I felt frustrated to the point of madness as Yossarian has one encounter after another with characters that culminate in confusion and frustration for him and the reader. One chapter, in particular, involves Yossarian trying to ask another character why he used to keep crab apples in his cheeks and why a prostitute was hitting him over the head. Admittedly, one of these points is explained with a twist of genius at the end of the story, the other, as far as I can tell, served no other purpose than to want to make me hurl the book out a window. I would feel my heart sink when certain characters appeared, knowing I was about to endure a conversation that would be aimless, tedious, confusing, and frustrating. Some may argue this is the point of Catch-22, but that doesn’t prevent the book from becoming an absolute slog for entire chapters at a time.

The novel also struggles to present the reader with characters they can like or root for. This is perhaps more down to each reader as an individual, but I struggled to care about the fates of most characters in the novel, as most are hard to sympathise with, except perhaps for the naive Nately, the homesick Chaplain, and the downtrodden Major Major Major. The main cast, including our protagonist, is easy to feel ambivalent for, and at points, outright despise. Not every protagonist in fiction is meant to be especially likeable, but characters like Holden Caulfield, Jay Gatsby, and Macbeth have shown that a reader can still feel empathetic towards an antihero. Men in the middle of war are rarely the beacons of decency propaganda posters would have us believe, and who can blame them? But plenty of characters found in Catch-22 go from frustratingly dull to downright hateable.

A reoccurring theme that runs throughout the novel is the fact that the female characters are paper-thin and appear to only be there to be sexualised. It comes as no surprise that a group of men far from their wives fighting a war are quite likely to view the few women around them through a lens of lust and frustration, but I struggle to recall a single female character who isn’t described in detail by the shape of her body or the size of her breasts. Not one female character appears to have any agency and her worth is reliant on how physically attractive she is. On top of this, Yossarian manages to sleep with almost every woman he encounters, despite having no real charm. All this culminates in one chapter that made me extremely uncomfortable when Yossarian sexually assaults a nurse and then attempts to continue the assault with another patient in the hospital. I’m not clutching pearls here, I know sexual assault continues to be common in the armed forces, and it was no doubt worse in past decades, but what made me so uncomfortable about the passage is that at no point did I get the impression Heller was condemning the actions of his characters, and I can’t shake the feeling the whole scene is meant to be funny to the reader, just another slapstick mishap involving Yossarian. What makes it even more unsettling is the fact the nurse ends up becoming romantically involved with Yossarian and the assault is never brought up again. This is just the most extreme example of misogyny in the novel, with other examples including characters groping nurses without consent and the fact that the only female character with a story of her own is only ever referred to as ‘Nately’s Whore’. There are also moments of physical and mental abuse towards women, as well as a passage that heavily implies a gang rape, though Heller never uses the word. I’m no stranger to books that deal with dark themes. and I don’t assume they reflect the views of the author, but I began to question what Heller was trying to achieve with his portrayal of women in Catch-22. One might defend him by stating that brutality towards women is a common action committed by men in wartime, with which I’d agree, but if that was his intention then he failed to condemn such actions.

The final part of the book is easily the best part and, while I still don’t feel the overall journey was worth it, it did mitigate some of the frustration I felt. It gave me pause for thought and had me re-evaluating some of my opinions on the book as a whole, but my primary feeling was a sense of relief that it was over. There are things I like about the book, and I admire Heller as a writer, but I encountered too many issues to say I like the book. I do have a sneaking suspicion that this might be the sort of novel that might grow on me upon a second read, but it will be a while before I feel up to that. In a way, Heller has managed to trap me in my own Catch-22, I like the book and yet I do not, and if you asked me if I’d recommend it I would say no, but you should give it a try. In the same way Yossarian is one of the few people in the novel to see the madness of his situation, I feel like I’m one of the few who didn’t love this book.