Jugal Hansraj - The Coward and the Sword

“Until one day, a chance encounter changes Kadis’ life. Armed with the magical sword of Kofu, the timid prince and two friends set out on a mission bring peace to the warring kingdoms of Kofu and Molonga.”

A child actor grows up to write a blockbuster fantasy tailored for the children of our times – there’s a moral in that somewhere. Jugal Hansraj’s book is in a sense a parable about how a lack of confidence can be overcome and all princes are not brave and warlike. The Coward and the Sword is a coming of age story with a difference. Prince Kadis is born into a family of heroic kings and into a state of threatened war. His father’s kingdom Kofu is in constant friction with the bordering kingdom Malonga, coincidentally ruled by King Rissho’s cousin. When Kadis turns 16 his father takes him on a tour of the border areas of the kingdom promising him that he has nothing to be anxious about. In the course of the tour, the timid Kadis makes new friends and discovers a wise great uncle who lives the life of a recluse and who tells him the story of a sword that divided the two kingdoms. Hansraj took his inspiration for the book from a Buddhist quote, by the 13th century Japanese reformer Nichiren Daishonin – ‘A sword is useless in the hands of a coward.’ 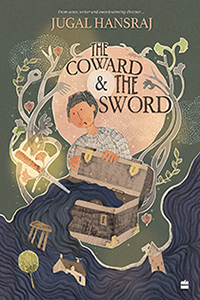 The story is a tale of how courage lies within and does not depend on external things. It also emphasises the importance of friendship and understanding relatives who have the ability to mentor their charges showing them how to look beyond the obvious and gain better understanding of what is truly important. At the heart of The Coward and the Sword lies the contradiction of peace being brought about by a sword. Hansraj attempts to weave adventure into his story through the excitement of youngsters infiltrating an kingdom in disguise and running into stumbling blocks over and over again and learning how to overcome them. It also gives a definition of where true courage lies. Occasionally there seem to be a few too many stumbling blocks but the story captures the worlds that children like to inhabit and apart from the boys has a brave and beautiful heroine. However, sadly for the Princess of Malonga, though she discovers a new cousin and is the enabler of the truce her role ultimately dwindles.

Intelligently illustrated with characters that straddle old and new styles in treatment and costume forming a complement to the text without imposing, the book will appeal to children who like to exercise their minds intelligently.