“There are no ‘V’ reviews, my OCD demands reparation so here you are, Mr Jules Verne.” ~ Shan

Our main protagonist is Professor Pierre Aronnax, a French marine biologist who narrates this heavenly classic in which we meet the wonderful, if slightly mad Captain Nemo and his beautiful ship, The Nautilus.

The three come together when a sea monster is spotted by several ships, the US government puts together an expedition to find and destroy this monster.

Aronnax through luck or fate, is in New York at the time of the expedition’s leaving and is invited to join the quest to discover the monster’s whereabouts, alongside Ned Land, a Canadian harpoonist and of course his faithful manservant Conseil. The creature is duly discovered and engaged, only for the ship to be damaged and the three men are thrown into the sea… They grab the only thing they can, the beast, and realise it is in fact some kind of submersible.. 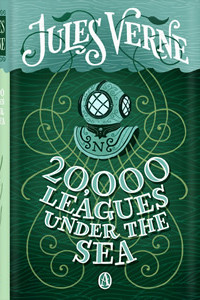 Our three hapless heroes are brought aboard and embark upon many wonderful adventures throughout the world’s seas visiting places both real and fictional. Nemo, whilst happy to allow the men to join him, refuses to ever let them leave his ship as he insists its existence must remain secret. Aronnax is enthralled and is happy to follow Nemo but Land continually plots to escape.. I’m sure you all know how it ends but just in case, we have people new to Verne, I’ll leave the rest for you to discover for yourselves..

The writing is as beautiful today as when I first read this story thirty odd years ago and it really should be a staple in any reader’s personal library if you haven’t got it, get it, haven’t read it, read it..