Kate Mosse - I Am Heathcliff

“Louisa Young’s furious, funny, righteous rant redresses the ‘romantic’ hero myth as she recites the violent misdemeanours of bad boyfriends in Heathcliffs I Have Known.”

The stories in this collection are each written by different authors, all of whom write using varying themes, ideas and genres meaning there is something for every Wuthering Heights lover in this book. Each writer has taken something whether it be characters, themes or ideas from the book and the stories’ premises include; the destructive love story of Cathy and Heathcliff, the wildness of the moors, issues of class, Heathcliff’s controlling and wild behaviour, and family feuds. 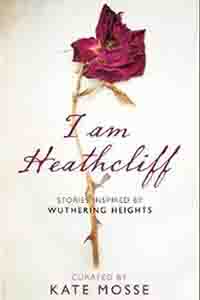 As these stories appeal to an array of readers, not all were to my taste. However, all were well-written and I greatly enjoyed many of these short stories – some by writers I already know and love and some by writers I have not read before but will now add to my list.

Among my favourites from this collection were; A Bird, Half-eaten by Nikesh Shukla, Thicker than Blood by Erin Kelly, One Letter Different by Joanna Cannon, The Cord by Alison Case, Heathcliffs I Have Known by Louise Young, Wildflowers by Dorothy Koomson, and Only Joseph by Sophie Hannah.

A Bird, Half-eaten by Nikesh Shukla:

Set in the modern-day, this short story centres around boxing. Brilliantly described, A Bird, Half-eaten has a cathartic feel to it and the sparring reminded me of the constant fighting between Hindley and Heathcliff in Brontë’s novel.

Thicker than Blood by Erin Kelly:

Thicker than Blood is a less subtle hint at Wuthering Heights, taking the characters of Heathcliff, Isabelle, Cathy, and Edgar straight from the pages of the book and dropping them into the modern-day with hot tubs, iPads, and social media ‘stalking’. A great read, this short story vastly modernizes the tale and opens it up to a whole new generation of readers. I greatly enjoyed the short extract of what, I believe, would make a great full modernisation of Wuthering Heights.

One Letter Different by Joanna Cannon:

Set on the wild, ‘Wuthering Heights’ moors of Yorkshire, this short story is a heartfelt tale of finding yourself and learning to look closer at the vivid colours of this harsh but beautiful landscape.

The Cord by Alison Case:

Alison Case has previously written a full-length novel entitled Nelly Dean, which followed Nelly’s side of the story, having enjoyed this book I was looking forward to reading The Cord. This time, Case has taken Heathcliff’s side of the story following his intense emotions after the incident in which he overhears part of a conversation between Cathy and Nelly, only hearing the negative about himself. Well-written and a great addition to Wuthering Heights, exploring a different vantage point of ideas and emotions.

Heathcliffs I Have Known by Louise Young:

In the time of the #MeToo and #TimesUp movements, Heathcliffs I have Known explores the character’s controlling, abusive and aggressive behaviour and highlights an enormous issue in our current society.

This story uses the name Zillah, a minor servant character in Wuthering Heights and builds a story around her. Written in the style that I know and love from Koomson which darts back and forth in time to fill in the plot, this short story has an enigmatic edge and focuses the theme of family feuds.

Only Joseph by Sophie Hannah:

Sophie Hannah is well-known for her mystery novels so it is no surprise that her short story in this collection is also a mystery. A murder happens at a performing arts school, which is rehearsing for a Wuthering Heights Musical. A thoroughly unique twist on Brontë’s classic, Only Joseph explores the themes of class, unrequited love and, like Louise Young’s Heathcliffs I Have Known, hints at the #MeToo movement. This tale also explores education and the Brontë family’s difficult relationship with schools.