“Daggerspell is the first in the Deverry series of fantasy novels”

This is the first novel in the 15-book Deverry series. The story is set in a world not unlike our own (but with magic) round about the late Saxon/early Medieval time period.

Kerr has a unique style of storytelling, heavily influenced by the Celtic tradition which weaves back and forth through the various reincarnations of the major players (not a spoiler as this becomes obvious very quickly). This gives her characters significant depth and multi-dimensionality.

In addition, the author also gives her characters a distinctive way of speaking which adds to the rich and detailed feel of the world she has created. 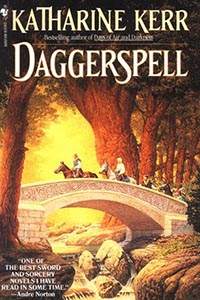 Despite the complexity of the story, Kerr’s writing style is easy and accessible – (I am not a fan of having to work hard to follow something I do for pleasure). I actually had to remind myself of how long the book was (450 pages) because thinking back on it, it feels more like half that. This is a great introduction to the series and well worth a small investment of time.