“Within pages I was hooked. This is a weird and wonderful book . . . Johnson is a master of pacing and suspense . . . it’s a tribute to Johnson’s storytelling gifts that when I turned the last page I felt bereft.”

Every so often a gem of a book comes along, a book with a story so strange that you would struggle to find it plausible as a work of fiction, How much more surprising and fascinating to find out that not only could the events have happened, they actually did. The Feather Thief by Kirk W Johnson is just such a book, and I found myself engrossed in the strange tale of the musical museum thief and his obsession with feathers.
To briefly sum up the events that the book is base on, in 2009 an American music student studying in London broke into a Natural History Museum and stole almost 300 rare bird skins, apparently motivated by a desire to use the rare feathers to recreate salmon fishing ties popular in the Victorian era. It really does sound too bizarre to be true, but the thief was eventually caught and charged with the theft, and selling the rare feathers for profit.
Impeccably researched , it is clear that this book is a work of passion for the author, and as we read, we learn that he became so caught up in the mystery that he took it beyond the scope of the police investigation and endeavoured to recover some of the skins that were unaccounted for, something that took him across the world. 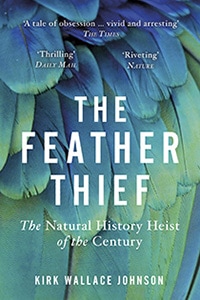 The book is a delight to read, entertaining , and while it contains a lot of detailed information and history, it does not become bogged down at any point. Beginning with the Victorian craze for natural history and the discovery of new bird species, it then describes how so many of these species became endangered or even extinct due to the popular fashion of using feathers and even whole bird skins to decorate ladies hats. Moving on it switches direction to the use of feathers in creating fishing flies, and it is at this point that we are introduced to Edwin Rist, a musical prodigy who becomes obsessed with the art of tying. This obsession will eventually lead to him committing the crime at the centre of the book., and this theft, the hunt for the thief and the missing skins , and the court case make up the majority of the book.
An unexpected gem of a book that proves the adage that sometimes truth is stranger than fiction.
I read an ARC courtesy of the publisher and NetGalley