Kirthi Jayakumar - The Doodler of Dimashq

“This book is an inspiration. It serves as a reminder that all we need is a little hope to carry on. That when all is lost, it is hope that will take us closer to our dreams.”

This is Ameenah’s story, a 14-year old girl, who is caught amdist a raging civil war in Syria. She loves doodling and aims to be an artist someday, alongwith nurturing a soft spot for a boy named Rami, in her class.

When the war reaches Dimashq (Damascus), her parents and brother, Majid, decide to marry her off to a man in Haleb (Aleppo).

Displaced from her family unexpectedly as a child-bride, Ameenah makes valiant efforts to hold onto the semblance of her childhood. 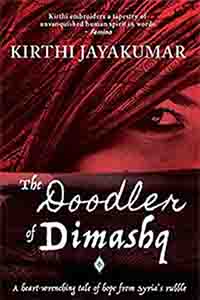 To her joy, her husband, Fathi, is unlike what she had conjured him up in her mind to be. He’s a teacher in a university, not too much older, and encourages her to continue her education. Ameenah begins to breathe normally, when she discovers that Fathi’s mother and grandmother, Tete, are equally nice and she develops a wonderful bond with Tete.

However, she chooses to keep one aspect of her childhood to herself – her doodling. Her angst and desperation of holding on to the fading memories of her childhood changes her doodling into meaningful strokes which she treasures close to her heart, hidden from the world.

As missile after missile brings the city down into a hapless pile of rubble; war-ravaged Syria looks just like a cadaver – twisted, broken, bent out of shape and wounded. The war annihilates Ameenah’s hopes of her motherland. Will she see her parents ever again? Will her new family be able to survive the anguish of war?

It is her art that keeps her sane in coming to terms with the destruction around her. She doodles on anything and with whatever she finds to keep her memories alive, to tell the world how beautiful her city and her people were. She soon becomes a beacon of hope and is aptly given the title of ‘The Doodler of Dimashq’ for all the survivors of war.

Her love for her family, her belief in her husband’s goodness, her friendship with Qudsia, and concern for an orphaned girl, Maryam, in her care is what keep her going.

This is a heart wrenching tale of hope that rises from Syria’s rubble.

Ameenah’s story is not political – she does not take sides between the government or the resistance. Her story is about home and a sense of belonging – belonging to a place and its people. It is about survival; to hold on to what little remains when everything around her is destroyed.

Each chapter starts with a small doodle and describes how the pattern in the doodle displays a certain thought.

This book is an inspiration. It serves as a reminder that all we need is a little hope to carry on. That when all is lost, it is hope that will take us closer to our dreams.

It’s painful to read about war-ravaged countries, but no matter how many times you witness or read things happening around you, it never really hits you as much as it does when it happens to you.

The writing is profound, the story-telling powerful and the narration sensitive.