“The first of the Daughter of Smoke and Bone Trilogy.”

“Daughter of Smoke and Bone” tell us the story of the teenage girl ,Karou, who lives alone in a fabulous studio apartment in Prague, where she is a talented art student by day and an errand girl for monsters at night.

While Karou’s origin is unknown to both the reader and the character herself, we know that she came to this world as a human baby, but was raised by creatures of the place she calls “Elsewhere”.

Having grown up in a shop of magical teeth that make wishes come true, she is unhappy with her foster fathers, a horned ‘chimaera’ named Brimstone, decision to leave the shop and live in the human world. 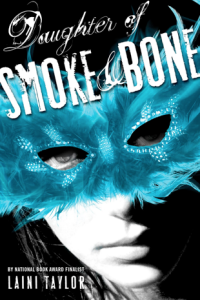 Karou’s job as an errand girl involves collecting and trading animal teeth on the black market in the human world. She does not know how, but she knows that they can grant wishes, which gives her the ability to use magic, if she has the right teeth handy.

The teeth that Brimston allows her to use are spent on typical teenage wishes, such as growing blue hair (’cause who needs the hazzle of hair products and visible roots?), learning a language flawlessly without having to study or practice, and giving a unibrow to a pretty rival, as revenge for kissing Karou’s ex-boyfriend.

As Brimstone distances Karou from her home and starts treating her more as an errand girl and less like a daughter, Karou stumbles into clues of her own origin, as the magical portals she uses for travel are getting destroyed.

In the realm of Elsewhere, the “Seraphs” are battling the “Chimaera” and their war has come to our world in the form of the warrior Akiva and his siblings, whos mission is to close all the portals, that allow Brimstone access to teeth.

When Akiva runs into Karou and recognizes her as an ally of the Chimaera, he tries to kill her, but is unable to for two reasons. The first is that he feels he might know her, the second is Karou’s magical self-defence abilities, which she did not know she had.

Frustrated by the weight of the secrets surrounding her, Karou takes matters into her own hands and puts herself in danger, trying to undo the mystery that is Akiva. Both knowing how dangerous it is, they meet in secret and fall in love, only to discover, that they have done so before…

As Karous’ past and origin is revealed, Brimstone and his shop are still a target, and Karou has to choose between love and family, before it is too late.

Laini Taylor has written a story which a young reader will read fast and intense, as it speaks to the teenage mind of simplicity, magical easy fixes, adventure and that epic forbidden love with the most beautiful creature in existence.

But underneath the shallow and rather predictable story, lies parallels to the war between Israel and Palestine, which like the “Seraphs” and the “Chimaeras” is rooted in mythology, a shared and misunderstood history and a war based more on tradition, than actual disagreements or hate. both the “Seraphs” and the “Chimaeras” fight eachother because they have been taught to do so, but neither side question why.

That is of course until a “Seraph” and a “Chimaera” fall in love.

In the choice of making the story a Young Adult Fantasy, Laini Taylor has only dipped her toes into her research and written a decent book. For example her description of Prague and Karou and her friends hangouts read as if the author has never been to the city (or any of the other European or African cities visited in the book), but only read the Lonely Planet Guides.
While the mystery of the teeth’s magical properties and uses is well thought of, as well as the descriptions of the world of Elsewhere are less shallow, they seem inspired by the work of other authors.

Please note, that I’ve written “inspired” and not “borrowed”. I see nothing wrong with authors writing scenes that are of familiarity to the readers, as rules of magic and fantastical creatures are applied when it comes to how an audience recieves the books. (The new kind of vampires and werewolfs introduced by Stephanie Meyer taught us that.) Many readers are loyal to traditional lore and for a book to be truly successful (and not have an anti-fanclub trolling the internet), it is often a good idea to give readers what they want.

After reading this book, I am not left with a feeling of having learned anything about myself, my fellow humans or having a different view on the world around me. Karou is not a rolemodel for the readers, she is entertainment. Her thoughts and actions are predictable and the rest of the triology are at the bottom of my to-read-list. Better saved for a week with a horrible case of the flu, where reading doesn’t require thinking. Like rom-coms and re-runs of “Friends”, Karou and a bowl of soup seems good company for a flu.

This is a good story for young adults, but I can’t help but think, that it could have been a great story for a wider audience, if the research had been better, the story involving less magic and more impact and the characters being less shallow and cliche.