“Beukes is a compelling storyteller who has created strong characters in Gabi and Layla.”

I finished this one last and felt, well, strange at the end. Stephen King is supposed to have said about it, ‘Scary as hell and hypnotic.’ Sorry buddy, we must have different ideas as to what scary and hypnotic mean. That strange feel I now define as being let down. It didn’t end well for me, even perhaps, just rough-stitched to get it done.

When story starts it’s just a normal run of mill cop investigating a murder story; a single mum of a rebellious teen as lead cop simply because she was on duty when the call came in about a body being found.

It’s just one of many bodies in the USA most violent city, Detroit. There’s the usual cop politics of course, and intertwined with that there’s a young writer, Jonno, trying make his mark in the world and decides it might be better using an iPhone than a pen, which makes a sub-plot if you like. A second sub-plot is the rebellious daughter, Layla, who with her friend Cass are doing their own teenage investigation and outing of internet sex-pests. 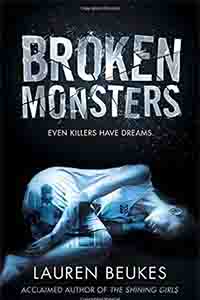 Detroit used to be the car-capitol of the States years ago, the city where most of the major car makers were based. They have all gone now leaving vast areas of derelict land. This is where most of the action of this story happens. Beukes has provided mono photos of some of the places mentioned in the storyline, just to give you a feeling of place. She took the photos as part of her research for the novel. You see, she lives in South Africa. I’m not sure you can get a real feel for a place without living there, not just a few weeks/months even, visit. Whatever …

Beukes voice is easy to read, which is always useful for me, I hate having to fight to get the meaning of the words, although there are others who would argue that one with me. It’s also why I don’t like or do poetry. Released last year, Beukes has three previous books to her name, but for me, she is a writer I won’t go out of my way to find any of the other three. Broken Monsters was OK I suppose, but I can live without reading any more of hers.