“A splendidly colourful read … an enthralling and resonant story of populist politicians, and religious war, and the reshaping of nations.”

This is a good biography, the actual length of the book not including Index, Notes or Bibliography is 295 pages so it is not a lengthy read and the book is a well written narrative.

Charles married Harreitt, daughter of the French King Henry the Fourth, who was catholic, so this alone would be the cause of so many of his problems with Parliment and the public that would eventually lead to a Civil War and the loss of his throne.

Charles was a great lover of the arts, and his art collection was one of the greatest in all Europe. In fact, as the book begins, Charles sees his wife for the first time while visiting the Louvre. The religious problems between Catholic and Protestant, and even The Church of England versus others Protestant sects are at the forefront of the story and they will dominate Charles rule. 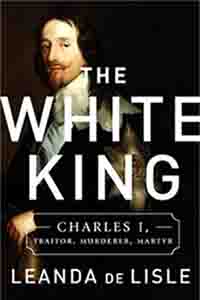 Money issues also gave Charles headaches, and his attempts at leaving Parliament out of the loop caused great distrust amongst that group, and the most radical of them would use Harriett’s Catholicism as a way to claim a Charles wanted to return the faith of England to the Pope, and the threat of Charles eliminating Parliament forever as the reasons to overthrow him.

This is a very sad story, and as you read on you will see how so much of this should have been avoided. The Civil War is well documented in the book, and as in any Civil War, the fact that brother will fight against brother is so well described. The heartbreak of so many losing their lives will weigh on the King so heavily. The book continues after Charles is no longer King to describe what happened to all the surviving main players in this story so you get a pretty complete picture of this period. There is even a very short section on the novel The Three Musketeers and what part this history played in the novel.

Anyone interested in British history would enjoy this book. Recommended.