“Lee Child is often mistaken for a US writer, so skilfully and enthusiastically has he embraced the idiom of the American thriller … One of the genre’s finest practitioners.”

Jack Reacher, the übermenschlich hero of Lee Child’s books, is a one-man wrecking crew, hurling bad guys into the darkness with breathtaking efficiency.

Jack Reacher is this devil, a destructive creature, without gravitas. Or, actually , soul. He is a hero of lawless fantasy: a world where the institutions of civility would melt away and all this world would be left with was a hard-muscled, rangy guy who could do all the necessary calculations in his head to insure that the bad guy got what he had coming. 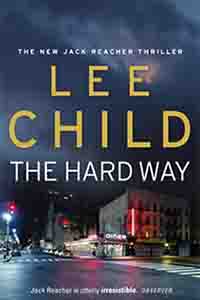 This obviously implies Reacher will, almost invariably, kill the bad guys through some combination of tactical brilliance and brute force. The real pleasure is in Reacher’s moment of introspection in the millisecond before the action occurs: his silent consideration of the variables of physics, geometry, and psychology that comprise a violent encounter. Just working out the sequence and the angles is a tour de force of split-second calculation.

In this crime fiction it all began with someone opening a car door and driving off. Reacher witnesses this innocuous event, paying it little attention while spending time in New York City. When called upon to answer questions about the man he saw, Reacher soon realizes that he may have witnessed part of an elaborate ransom payment. A woman and her daughter have been kidnapped and Reacher is hired by the distraught husband to help bring them home at any cost. While working with his temporary employer, he soon learns of the man’s sordid and criminal past, which may play a role in the larger kidnapping rationale. The further he digs, the less Reacher thinks this is a simple swap of money for live bodies.

This tenth installment is a fantastic blend of suspense, mystery, thriller, and a slight touch of romance, all rolled into one amazing story where surprises seem to lurk around every corner. what makes this book extremely interesting is not only the unpredictable plot but also the way the author keeps readers invested in the characters. The suspense and enormous tension are built up throughout the entire story which are sure to keep the readers on their toes, and of course, on the edge of their seat as well.

The prose is clear and concise all through, no place for ambiguity. The writing style is a little odd with short sentences, mostly just stating the facts.

If you’re looking for a book with shocking revelations that keep you turning the pages faster than lightning, then pick up this one. You’ll definitely get a great deal of enjoyment and excitement out of it!