“A massively different novel…the effect is – quite literally – devastating.”

Briefly, this is an account of a single RAF bombing raid on a town in Germany, written from the perspectives of a variety of major and minor protagonists, in the air and on the ground, in Germany and England.

The story takes you from the morning of the raid as the characters wake, go about their daily business and prepare for the raid, all the way through the raid itself to the end of the night as the bombers land and the survivors crawl from the rubble.

It is a truly fantastic story, written by a master storyteller and to label it as fiction doesn’t do it an ounce of justice. It is so meticulously researched that you’ll put it down thinking you’ve read a dramatisation of a real event which, I suppose, it is – an event that was played out almost every night for four or five years in the middle of the last century. 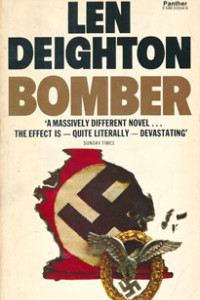 Indeed the research goes so far as to provide a glorious description of the design and cost of the Lancaster bomber, a chilling exposition of the tactics and effects of a typical aerial bombing raid on a civilian town and an AtoZ of a typical RAF bomber station.

Despite this detail it is no “technothriller” and the story concentrates on the personality, problems hopes and fears of the characters and you will find yourself sympathising with many of them and disliking others (regardless of whether they’re British or German).

I love how the mundanity of the events portrayed in the early chapters starkly sets off the horror of the raid itself and while I have every respect for the bravery of the RAF bomber crews (as does Deighton) the book brings home just how brutal, cold-blooded and even murderous the concept of area bombing really was.

Kingsley Amis rated this as one of the best books to come out of the 20th Century. I am not literary genius, but it’s hard to disagree. This is one of those rare books that has sat on my bookshelf for nearly 20 years and has survived countless car boot sale culls and been read many times.

Campbell McAulay who included it in his ‘top 5 war picks‘