“Leon Uris is a storyteller, in a direct line from those men who sat around fires in the days before history and made the tribe more human.”

“In Ireland, there is no future, only the past happening over and over. ”

This last sentence in the 900 page epic captures the essence of the Novel and more so the History of Ireland in a nutshell. This novel has been claimed as Uris’s best work, better than Exodus, and after reading it I completely believe that.

Although, it’s classified as fiction, but this is as real as it gets; I checked up on all the major historical references in the story and they all are fact! Except the fictional names, each and every thing in the Novel is the ugly truth! 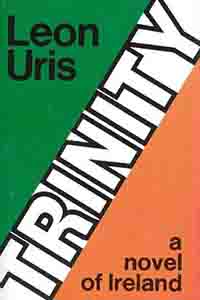 Leon Uris has somehow managed to capture the minutest of details about the depressing life of the Catholics in Ireland under the British Imperialists that ruled ruthlessly over them. Also, the book reinforced or rather added fuel to fire to some of my extreme beliefs, and none more stronger than the concept of Religion! Till the time, there is religion , people will keep on getting fooled into doing repugnant things – not only to others but also onto themselves. And the Imperialists,  businessmen,politicians, self proclaimed Godmen will keep on playing this card over and over and over again to exploit the common people for their evil vested interests. The most gruesome testimony to this fact comes when a Protestant woman is killed in the most goriest manner possible by a pack of crazy women just because their Church Priest denounced her for sleeping with a Catholic guy. This was the most disturbing incident in the Novel, described in full details.

And of course, the age old British snobbery, hypocrisy, deceit, cunning is on full display – be it Ireland or India or South Africa. I need to read ‘An era of darkness’ soon though I know what to expect in it.

Coming to the characters, it is narrated by 12 yr old Seamus who starts off as a sidekick to his neighbour,  Conor Larkin, who is the undisputed hero of this novel. I just loved Conor and his father Tomas so so much. Men who lived by their own code and rules till their last breath. There are negative characters by the dozens and all of them have been woven very well into the plot. Then there are the stoically strong Irish ladies – be it Mairead (seamus’s mom) who is the only midwife in Ballyuotogue, or Conor’s mom Finola or lady Caroline or Atty Fitzpatrick. These characters are going to stay with me for a long long time.

The story telling is of the highest standards which would make the Shanachies (Irish story tellers who went all around the country) referred to in the text extremely proud. There is so much of everything in this story of Ireland – struggle, love, hatred, betrayal, sadness, treachery, helplessness –  and these emotions keep on coming in a never ending circle throughout this epic novel.

All I can say is, I’m extremely happy I picked up this novel; not only was it a whirlwind of emotions but such a lesson about Irish history which I wouldn’t have grasped with such clarity and depth had I referred to history books or Wikipedia or any other source. Facts remain the same, it’s the story telling that matters!

Here are some of the memorable quotes from the Novel :-

“what we have confused is the belief that heaven and paradise are the same. So long as we are capable of moments of paradise here, we ought to cherish them,because we may not find paradise in heaven. “

” there is no mystery more intense than a man’s love for his country. It is the most terrible beauty of all. No greater tragedy has befallen our people who through generations of suffering at other’s hands, have lost this furious love of country. ”

” British intent was not only to occupy, govern and exploit Ireland but to eradicate the Celtic culture and superimpose an Anglican culture upon a people totally alien to it. ”

Now, the Novel doesn’t end completely because it’s still 1916,  bang in the middle of first world war. So, I’ll have to pick up its sequel ‘Redemption’ soon now.

Rating – without any doubt, a boisterous 5/5.