“Erin’s Diary is the perfect accompaniment to the world of Clare’s neuroses, Michelle’s rebellions and Orla’s madness. As a wee English fella myself, i have found it very educational. So wise up and nab a copy! It’s good craic!”

Erin’s Diary: An Official Derry Girls Book is a humour and fun book written by Lisa McGee who also created and wrote the hit TV series Derry Girls. Everyone who has watched the show (on Channel 4 in the UK) will know the importance of Erin Quinn’s diary and this book is a physical creation of the fictional character’s diary. 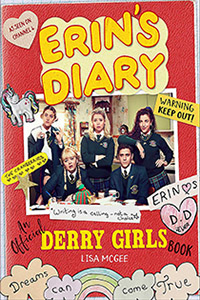 The book is filled with diary entries, letters, drawings and still photos from the TV series. Unsurprisingly, Erin’s Diary captures a lot of the events which take place during the show and watchers can follow the plot of the TV series through the book from the beginning of series one to the end of series two. The book also adds a few extra details and insights that weren’t seen in the show including; finally answering the question of “the big bowl.”

This is a ‘cracker’ little book, a great laugh with the same humour that watchers loved seeing in the Derry Girls series. Perfect for anyone who’s has watched the first two seasons of the programme and is now eagerly awaiting the third season to find out what Erin, Claire, Michelle, Orla, and James get up to next.