“Erdrich has chosen a story that is near to her heart, and it shines through on every page.”

Just finished The Night Watchman by Louise Erdrich. Historical fiction. This is the story of Patrice and her uncleYjomas, who is the night watchman at the gem factory. The story takes place in 1953, and the Federal Goverment is about to dispossess the Indian tribes from their lands in North Dakota. Thomas takes up the duty of preparing a defense against the bill and he must get the cooperation of as many as the local tribesman that he can.

It is also the story of the Native Americans in North Dakota. How they live,many in abject poverty. It is a story of tribal customs and mystical beliefs. It is the story of how some survive, and how some can’t escape the level of poverty encountered on the reservation.
But most of all it is about family love and loyalty. 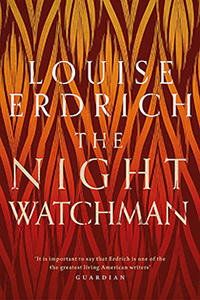 Based on actual events, this is another powerful book. Y the author, once again. Ringing to our attention the plight of the Native American in modern society.
Highly recommended.