“Circe gives us a feminist slant on the Odyssey. Miller makes these age-old texts thrum with contemporary relevance. An airy delight, a novel to be gobbled greedily in a single sitting.”

A tale of “Gods and Mortals” or borrowing from Myths and Legends of the Greek, Roman or other ancient civilizations, the author writes a novel that is both beautiful and mesmerizing and also captivates the imagination, I loved and appreciated all the elements that the author wove into this work. Circe, daughter of Helios the Sun deity or God of fire was not a favored child and thus was placed in exile on her own island. Circe, known as a witch and caster of spells bides her time and is often visited by other demigods and mortals, not always welcomed by her. 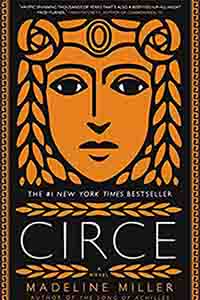 Ms. Miller created Circe as a woman of strength who is a match for any of the higher deity’s and many times she faces the vengeful wrath of the more powerful using her wits and skills of spells to thwart them. I’m sure the reader will find within the narrative the names of many characters known from other works and they play a minor role in the weaving of the story. Highly recommend reading this work.

This novel follows The Song of Achilles, Miller’s retelling of the legend of Troy. Circe is a nymph, daughter of a greek God. Legend has her as a witch. In this recreation of parts of her legend we follow Cerci as she learns she has the powers of witchcraft by converting a human into a God so she could marry him.

When her witchcraft is finally found out, she is banished to solitary confinement on an island. Many of the Greek legends will visit the island, including Odysseus, trying to return home after the siege of Troy is finished. She will bear his child, and while Odysseus continues his long trip home not knowing he will be a father again, Circe gives birth to a son.

From here the book mostly follows the Mythology concerning Circe, with some minor changes. In my opinion the author successfully portrays Circe as more human than a goddess and the many events that occur in the book show her gradual change from an angry and vengeful person to one of great intelligence, heroism and a goddess with a heart. If you read her Achilles book and enjoyed it than you should certainly enjoy this. The book can be read on its own. While I believe the story is really for those with a taste for the great legends, I think it is well worth reading by anybody.