Madhavi S Mahadevan - The Bride of the Forest:

The Untold Story of Yayati’s Daughter

“The story of the salvation of kings by a maiden.”

For many the name Yayati will not ring many bells. Madhavi Mahadevan has taken a story from the Mahabharata which is not directly linked to Kurukshetra, though it is in a sense the story of rivalry between kings and queens. In the Mahabharata it is simply referred to as ‘story of the salvation of kings by a maiden.’ Mahadevan takes the take of Drishadvati and fleshes it out into a story of what the identity of a women is truly worth. The girl, fathered by King Yayavati on an unknown woman from the forest grows up in the shadow of the palace. Her world is one where only rulers matter – her father was cursed with premature old age for his licentiousness by his father in law and was forced to find a son willing to suffer old age on his behalf in return for which the son would be gifted a kingdom. Drishadvati enters this story of kings and heirs and, gifted by her father to a wandering Brahmin is bartered in exchange for a troop of magical horses to various kinds. Drishadvati’s horoscope predicts that she will be the mother of four boys – the Brahmin Galaad needs a gurudakshina for his irascible guru Vishwamitra. As a result he trades Drishadvati’s womb to four kings who have no heirs. 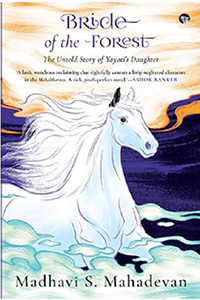 The result is a story of the lack of choices open to women. In a patriarchal epic world, their only importance is that of brood mares. Whether they have any feelings or otherwise is secondary and they exist only as daughters, wives and mothers – sisters are left out of this list and barring a mysterious Sadhvi or an island, there seem to be no women without men. Identity is the role you play in society.

For those who know the Mahabharata there may be a subtle undercurrent of Draupadi’s being shared among five men in Drishadvati’s story of a womb divided. For those who do not, the story is enough to engage. Mahadevan’s use of language makes the formality of myth readable with words like ‘raggedy’. However, the build up to the eventual denouement is possibly longer than the retelling and some questions remain unanswered.