“The Testaments is worthy of the literary classic it continues. That’s thanks in part to Atwood’s capacity to surprise, even writing in a universe we think we know so well.”

Aunt Lydia’s tale is told through her own writing, while the two young girl’s stories are presented as ‘witness statements’. 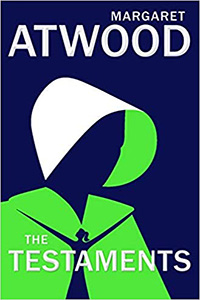 The book’s plot darts back and forth from these narratives each of which is portrayed by their own symbol and within these sections are chapters, often several at a time from each character before it is the next character’s turn to speak. This way of presenting narrative allows Atwood to build tension, often leaving one character on a cliff-hanger while the next character continues their story.

Much like The Handmaid’s Tale, The Testaments is an examination of Gilead, an extreme totalitarian regime of inequality, oppression, and fear. Atwood states that although both books are dystopian fiction, everything that happens in them has happened in our own world in some way, place or other. Through The Testaments, Atwood explores some extremely important issues including; abortion laws and controls over women’s bodies, climate change and environmental crisis, propaganda, shame surrounding periods and other ‘female problems’, terrorism, and the refugee crisis, the perilous journeys they take, and the way they are often treated in their new ‘home.’ Although all of these are shown in a perhaps more extreme, over-exaggerated and fictionalised way, all are issues faced by people around the world today. As Atwood herself writes, “History does not repeat itself, but it rhymes.”

The story of The Testaments, is an intriguing and gripping read that I didn’t want to stop reading. It uncovers secrets about Gilead, proclaims shocking revelations and is packed full of action and deception. At last, Margaret Atwood has answered the questions many fans have been asking for years including; the start of Gilead’s regime and how it came to be, what it’s like to be a young girl in Gilead, the life of the ‘Aunts’, and, of course, how Gilead’s downfall came to be. It has been 34 years since The Handmaid’s Tale was first published and the long-awaited sequel The Testaments is well worth the wait.