“Bestselling writer Mark Gimenez takes on the Grisham mantle with a politico-legal-romantic thriller that fairly whips along.”

First published in 2012 The Governor’s Wife is the story of one man’s greed for power leads to his wife leaving him to make a life for herself. The Governor is Bode Bonner of Texas, his wife is Lindsay; they have one child, Becca. They live in the Governor’s Mansion in the state capital, Austin. They seem to be a perfectly happy family … oh dear … how can it be when Bode is affair with one of his staffers.

Politians are born liars, whatever party they represent, and Bode is no different. Bode has a lot to hide, including a huge budget deficit. In true GOP style, he rages against Mexicans, gays, drug addicts, Democrats, Wall Street, indeed anywhere if it moves the attention from, or to blame them for the problems of Texas. 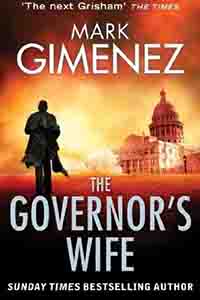 Sitting by himself he decides he wants to be the US President. His political advisor, Jim Bob, says he can’t do it, he has too many groups against him, but the Tea Party (a party of the GOP), have their own candidate. In addition, he couldn’t see yet another Texas governor sitting in the White House after the three previous incumbents.

‘To get into the White House, you don’t just need to ride a wave, you need to BE the wave,’ says Jim Bob. Bode still dreams of being President though, even though he knows he’s not on a wave, let alone being a wave. That changes when Bode and Jim Bob visit a friend to go hunting. Bode shoots his target, but it’s not one he wanted, and there were three targets, not one. At that point another thread joins the story, revenge! Slowly the body count grows; the plot speed increases, and the twist at the end is a real is a surprise.

Would I recommend it? Oh yes, certainly. This is the fourth Gimenez I’ve read and all of them have been good reads. Bode Bonner reminds me of a certain US politian often in the news these days. We have a 540 page paperback here, and in this short review I can’t cover everything, and I’m sure you would thank me for doing. So go on folks, spoil yourselves …