“With its moral complexity and a graphic hybrid of Soviet Expressionism and Fifties comic book styling, Red Son is a charming and potent work.”

Fantastic “what if” story, combined with great artwork makes this a great read and one I enjoyed immensely. It’s a simple idea, take the all American good guy Superman and re-imagine how things would have turned out if he had landed in the USSR,  but it is so well done here, and develops into a thought-provoking look at morality, power and corruption.

This is part of a series of books from DC Comics known as Elseworlds, where familiar characters are given a new and unlikely twist, but can absolutely be read as a stand-alone story and is a great way for someone who wants to try out the superhero thing to dip a toe in the water without having to know a lot of backstory and continuity etc, which so many people find off-putting. 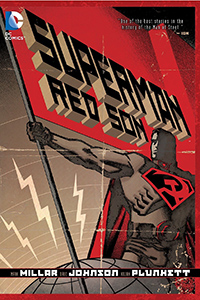 It remains true enough to the Superman origin story that most people are familiar with from popular culture, but gives it enough of a twist to make it interesting and compelling. Look out for appearances from other DC staples, they are among the highlights, particularly the interpretation of Batman , and of course no Superman story would truly be complete without an appearance from Lex Luthor, and in fact he is one of the more compelling characters in the book.

The artwork is quite stylistic and old school, and the colour palette is a bleak mix of greys and reds to fit with the story being told, so that the Man ( or in this case , Comrade) of Steel gets a new look suit.
If I had to complain about anything ,I would say that the book is a  little short to contain a story with the ambitious scope of this one , so it does feel a little rushed at times.