“Orphaned at the age of six, Jane Williams has grown up in a series of foster homes, learning to survive in the shadows of life.”

Summary: Orphaned at the age of six, Jane Williams has grown up in a series of foster homes, learning to survive in the shadows of life. Through hard work and determination, she manages to win a scholarship to the exclusive Birch Grove Academy. There, for the first time, Jane finds herself accepted by a group of friends. She even starts tutoring the headmistress’s gorgeous son, Lucien. Things seem too good to be true. 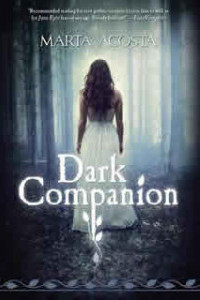 The more she learns about Birch Grove’s recent past, the more Jane comes to suspect that there is something sinister going on. Why did the wife of a popular teacher kill herself? What happened to the former scholarship student, whose place Jane took? Why does Lucien’s brother, Jack, seem to dislike her so much?

As Jane begins to piece together the answers to the puzzle, she must find out why she was brought to Birch Grove—and what she would risk to stay there….

About The Author: MARTA ACOSTA is the author of the award-winning Casa Dracula series. She received degrees in creative writing and literature from Stanford University and was a frequent contributor to the San Francisco Chronicle and the Contra Costa Times. Her books have been selected as: Book Sense Pick, Fresh Fiction Fresh Pick, Catalina Magazine Humor Book of the Year, and BookPage Notable pick. Marta lives in the San Francisco Bay Area with her family.

Favorite Character: I have to say I really didn’t have a favorite character.

Least Favorite Character:
Lucian he was an airhead and full of himself. He reminds me of how most guys are now adays. Using girls to get what they want.
And Jane in some ways especially when she let Lucky use her. She’s like most girls these days. Only doing what guys what and getting used. I hate girls like that.

Book Crush: Jack because he is the type of guy who doesn’t care what people think of hm. He does what he wants. He is also a sweetheart.

Relate to Character: I couldn’t relate to any character. I did have a few things in common with Jane but she was srupid. Made stupid mistakes just to be liked. I’m not like that.

Rate: 2 stars. It was alright not my favorite book.

Least Favorite Part:
Every decision Jane made and ignoring Jack when he tries to help her.

Change?: Jane and her decisions.