Meena Kandasamy - When I Hit You

Or, A Portrait of the Writer as a Young Wife

“Urgent… It’s beating heart is a universally recognised quest for freedom and meaning in a world where women are still shockingly undervalued.”

A searing, stark and provocative novel of an abusive and oppressive marriage.

Seduced by politics, poetry and an enduring dream of building a better world together, the unnamed narrator falls in love with a Communist university professor. She learns soon, that what for her is a bond of love is for him a contract of ownership.

His paranoid extremist mind sets about reducing her to his idealised version of an obedient wife, bullying her and demolishing her ambition of being a writer in the process. When she attempts to push back, he resolves to break her resistance with brutal violence and rape. 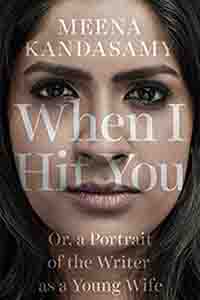 His downward spiral into monstrosity was sudden and it hits the narrator with a bang. Constantly berating her, he takes shouting and verbal abuse to a new level altogether. She watches herself descend into the sinkhole created on the pretext of love. She knows it’s wrong. She also knows it’s inevitable. So, she has become what he wants her to be: the good housewife. She cooks food that pleases him. She allows him sex when he wants it. She wears the clothes that he wants her to while silently crying tears of pain.

Why is she putting up with this?
The she wanting to leave today might be the she who thinks she should have stayed tomorrow. “What if he was given the chance to rectify his mistakes, to change himself, to begin anew?”

In today’s era, when we are advocating equality between sexes and feminism, there are women still trapped in such oppressive marriages, where they lose their reason for existence.

This book will shock you to the core.
The brutal atrocity will make you question humanity.