A History of Dressing and Undressing around the World.

“This is a book not for the casual reader but for those with a sense of the quirks of human nature.”

Before there were clothes there were bodies. Of course separation from clothes was so long ago that most of the world does not remember being naked.

Instead on the beaches of the Riviera, it makes nakedness into an in your face statement and the issue of women as sex objects and the subject of sexual harassment runs into pages across the media.

At the other end of the spectrum there are the tribes of the Andamans who are still unashamedly naked, but primitive civilizations like theirs are few and far between. 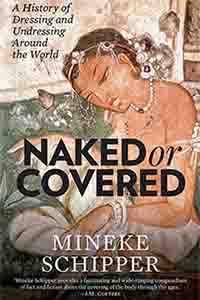 Covering up began with embarrassment, a feeling that nakedness wasn’t quite the done thing. The Bible put it down as original sin; Eve’s eating the forbidden fruit, a story that was fairly similar in the Koran. Most of the time the nakedness involved was that of a woman – women were the ones causing the problem and therefore needed to be covered from head to toe. Preferably by the man who was responsible for her.

In her history, Mineke Schipper covers the differences between nakedness and clothedness. This is a book not for the casual reader but for those with a sense of the quirks of human nature. Schipper has snippets like the fact that men and women bathed naked together in the Middle Ages till the ravages of the Black Death and syphilis put a stop to it all or the fact that a woman in a bikini and a woman without a hijab are both considered to be naked in different societies. Very often clothing, or the lack of it, is a statement of identity – clothes maketh the man, as the saying goes.

Schipper notes the similarities between orthodox Muslims and orthodox Jews with respect to their women, not to mention the resemblance between the veil of a nun and the hijab. Throughout the book there is a series of ups and downs – show more, show less, use naked women for advertising but don’t respect them and never never show a man naked. Michelangelo’s David had to be adorned with a fig leaf on a trip to England so that Queen Victoria’s daughters were not scandalized – the Queen had already seen and raised her eyebrows at his manly proportions.

What is obvious is that dress is an issue that is not going to be easily solved since it keeps changing – and nakedness is very often used as a means of protest as in the case of the 12 Imas of Manipur who flaunted what was normally hidden in order to shape the rapists in the Indian Army. Nakedness across the globe is used as one of the most extreme forms of protest in fact – like the one staged in response to Trump’s comment about imperfect bodies.

Schipper does not comment or take sides – her narrative remains neutral and she does not condemn practices. Instead she manages a delicate balancing act. Like the academic that she is, she does overload her text with examples, but her style is easy and for those who are interested in the issues of being dressed or undressed, this book is one to go through because a lot of the social and cultural history is not familiar to most people.