“Its most unique asset is its ability to fully furnish a character of flesh and bone that throbs with life and mortality.”

Monique Roffey’s debut novel, ‘Sun dog’, alternatively named, ‘August frost’ after its protagonist, is a masterpiece in its genre. A detail oriented book, it discards a regular obvious plot graciously. It rather chooses to follow August through his daily life, diving into his surroundings with his observing and emotive gaze, as the seasons run through his body forming a beautiful story of transformation.

Its most unique asset is its ability to fully furnish a character of flesh and bone that throbs with life and mortality, within a quarter of the book. It uses vivid comparisons that are set alight by unforeseen metaphors that also reveal August’s way of perceiving things, where he is from and past experiences that have made and broken him. 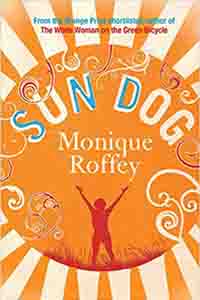 On occasions it turns blunt and bold to the extent it makes the reader feel obtrusive for invading the privacy of its characters which stands testimonial to the author’s rich character developing skills. Having said that, much of the development that the side characters see come from the protagonist’s viewpoint and hence is scattered and irregular. It is raw and lost in artful nuances at some places; stopping by the road to describe a flower patch or the fine food stock at the deli with child-like wonder that is ironically heightened by an expert’s knowledge in the subject that August possesses.

The book also saves a good portion of itself for mulling over August’s physique that turns eyes sore upon arrival. His ‘orange-ness’ stands out as starkly as it could, relentless against his hatred for it. The book is scattered with these notes about his body and it’s semblance with the seasons and could be considered the main theme of the book if necessary.

Due to its love for detail, the book sometimes seems thick and slow moving. And it can be overwhelming if approached with the need to finish it. It is more of a slow cooked delicacy that has to be enjoyed in leisure. No wonder, it has been called sensual, for it is truly love’s kindred spirit. Because for the right person at the right time, it is a terrific read that changes the very way they see everyday life.