“Nayar has put together a story that will appeal to children fond of cooking or at any rate, fond of eating.”

This is the story of summer camp out almost in summer camp season. However Nandini Nayar tells the story of a summer camp with a difference. Camp Sweets is where would-be mithai makers learn to improve their confectionary identification and crafting skills and Raj is the unfortunate little boy sent to the camp by his enthusiastic mother who runs the legendary Tasty Mithai Bhandar and has a host of Hindi film songs adapted to sweet making.

Oddly enough, Raj’s mother who senses most things seems not to know that Raj is fond of Western sweets, not Indian. She sends him in the hope that he will grow up to run the Tasty Mithai Bhandar in tandem with his sister. 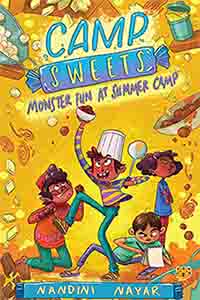 Raj arrives expecting the worst but an unexpected encounter makes him change his mind. In a world where Master Chef dominates television screens and celebrity chefs are feted, Nayar has put together a story that will appeal to children fond of cooking or at any rate, fond of eating. Raj appears to have a talent for hiding things – especially his chocolates and biscuits from his mother – but he fails when it comes to hiding the unique Vartik who becomes his summer camp mate. Vartik and he voyage accidentally into fusion food and Raj realizes that mithai doesn’t always have to be traditional.

Nayar’s interest in food is strongly in evidence, but she does point out that many of the social stereotypes don’t always work. All girls are not interested in cooking, as in the case of Lata who wants to be a scientist and many children do not want to follow in their parents’ careers. To heighten the fun quotient she throws in teachers with sweet related names. The story takes time to build but will appeal to children with a taste for the different.

One question though, why is it Camp Sweets and not Camp Mithai?