Escape Routes is a collection of short stories from début writer and former bookseller from Mr B’s Emporium of Reading Delights, Naomi Ishiguro. As the title suggests, the stories featured in Escape Routes, are all themed in some way on the idea of escapism, freedom and flight. 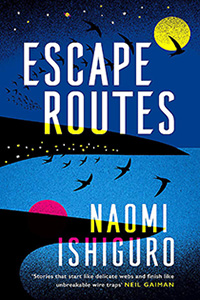 Naomi Ishiguro’s folk tale style, short stories of escapism are all vividly described, pulling the reader deep into the story’s setting, whether that setting is Brighton’s seafront, the hectic city of London, or straight through a vortex on the page of a drawing.

The stories featured in Escape Routes are all very different so there’s definitely something in here for everyone. For me personally, the short story entitled ‘The Flat Roof’ was such a heartfelt tale with such beautiful, elaborate descriptions and a narrative tightly spun in such a short amount of words, that it really spoke to something deep within me.

Each of these fairy-tale-like short stories themed on freedom tackles the idea of escapism in a different way, whether they’re examining mental health, childhood, adulthood, coming-of-age, relationships, grief or even the deeper question of understanding the universe. Every single one of these imaginative stories perfectly balances on the edge of reality and fantasy in a way that makes them mesmerising and alluring. With such a beguiling collection of short stories, we’re excited to see what else comes from Naomi Ishiguro in the future.