“The third book of the Unwind Dystology is just as captivating as its prequels.”

Neal Shusterman’s Unwind series never ceases to amaze and entertain me. My favorite quote from this book: “Hope can be bruised and battered. It can be forced underground and even rendered unconscious, but hope cannot be killed.”.

The story continues of the main characters who have managed to survive thus far. Cam, the rewind, is still on the scene. The characters who have been separated don’t know where the others are or even if they are still alive. There is a lot of hiding, running, danger, and sometimes help at every corner. We find sympathizers to Unwinds in some of the strangest places However, the attitude is generally that Unwinds aren’t welcome anywhere for very long because giving them sanctuary, especially these characters, will get you killed. 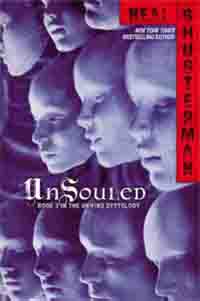 Some very interesting developments occur with Cam. I don’t want to spoil this for people who haven’t read it but if anyone would like to have a philosophical discussion on what happens to him please inbox me! Suffice it say that again this book is thought provoking on matters of humanity that we for granted everyday.

That right there is what I love so much about this series. The first two books were set up really well. We know all about Unwinding and the people who are for and against it and why. We understand the reason why it was established in the first place. We now know the characters very well.

This book to me took more of the focus off the actual of issue of unwinding itself and was more about all the emotions involved. We got to see the characters at their most vulnerable points. I was glad to see that even the most beloved characters had a weakness but throughout the whole journey they have been able to overcome their weaknesses. I was also shocked to see the attitudes of those who profit off the unwinding business, whether it is the government, independent organizations, or parts pirates.

The total disregard of human value is appalling but sadly realistic. One of the things I really wanted to get from this book is the subject of Starkey. Man, do I have a problem with him! I really wanted to see him get his comeuppance. Whether or not he does is up to you to find out in the pages of this book.

I am always amazed and impressed that Mr. Sushterman is writing to a “young adult” audience but he never assumes they are unable to understand the big concepts of life itself. He “dumbs down” nothing and expects his audience to keep up with him and I find that so very refreshing amongst the trite that is out there for teens. I do wish that the labels of “young adult” did not have to apply. Although the book is about teens, it is about so much more. All we adults need to do some long, hard thinking about the issues brought up within these pages. It would serve us all very well.