“Filled with advice on how to woo a woman, grill meat, and grow a perfect moustache, this book makes for perfect reading around the campfire.”

For the uninitiated, Nick Offerman first came to fame when he played the role of Ron Swanson in the TV show Parks and Recreation. His character is a gruff but secretly kind hearted department head working in the Parks and Recreation sector of government. 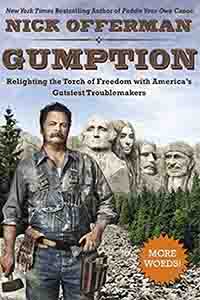 In Gumption, Offerman selects 21 Americans he believes had gumption to spare and were/are instrumental to making both the United States, and the world, a little bit of a better place to be. The book is split into three parts, Freemasons, Idealists, and Makers. Freemasons includes the likes of George Washington, Benjamin Franklin, and Frederick Douglass. Idealists introduces us to thinkers and politicians such as Theodore Roosevelt, Eleanor Roosevelt, and Yoko Ono, whilst Makers includes craftsmen and women like George Nakashima, Willie Nelson, and Conan O’Brien.

As you can see, the list includes an impressive range of figures from founding fathers to present day entertainers. Some may seem to have little in common with one another, but they all have their own form of gumption. Not only is the book a humorous romp through the best and brightest America has to offer, but is also a nice light bit of history for those of us who aren’t as familiar with American heroes like Washington, Franklin, and Madison. For instance, the chapter on Frederick Law Olmsted gives readers a light but fascinating insight into how the architect designed Central Park so it could be enjoyed by all, not just the wealthy. The chapter on Theodore Roosevelt reveals how the man continued to finish a 90 minute speech despite having been shot in the chest. It also tells how the Teddy Bear was named after him due to the fact he was once on a hunt but refused to shoot a trapped bear as it would have been “unsportsmanlike” The book does a great job of filling readers in on figures they may have heard of but not know a great deal about. It does an equally great job of introducing readers to people they have probably never even heard of. Offerman selected his 21 figures well and the more obscure characters are every bit as interesting as the more famous.

It should also be noted that, whilst Offerman clearly admires each chosen person, he’s not by any means blind to anything they did or said (particularly the more historical figures) that may not fly today. The book doesn’t revel too much in hero worship, nor does it feel overly patriotic to non-American readers. The book is very readable and there’s no real reason to read each figure in a particular order. Whilst I certainly learned a lot about the history of America and these figures that helped define it, the book never felt dense or dry. Offerman comes across like that teacher at school who was always engaging. It’s the sort of book you might find yourself skimming through on a rainy Sunday, only to realise hours have gone by.

I’d highly recommend Gumption to any readers who are already fans of Offerman or to readers who would enjoy a humorous romp through some of the icons of American history. The paperback was recently released so, if you’re looking for a good Christmas Present, you should certainly check it out.