“A whip-smart addition to the literature of addiction and an intimate look at the beating heart of codependency. It’s a propulsive story of empathy, desire, recklessness, and the things we risk for love-I couldn’t put it down.”

I have read many memoirs about addiction, (an area of particular interest having worked in addiction services in the past) and Good Morning, Destroyer of Men’s Souls by Nina Renata Aron ranks with the best of them. It is a brutally honest and incredibly compelling book that held my interest from the first page to the last word, and I applaud the author for her candour and her skill in telling her story. What really makes this book stand out from the crowd is the focus on codependency and how addiction impacts not just on the addict themselves but also on those around them, family and friends. 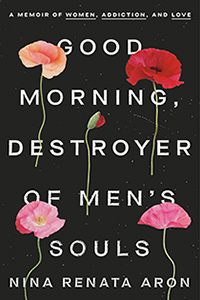 In this book Aron gives an account of a toxic relationship with K, a man she first met as a teen then later encountered again after marrying and having children. Despite knowing that K was an addict, she believed that he was trying to get better , and so embarked on an affair that eventually caused her marriage to end while she moved in with K and ended up financially supporting his habit. Over the course of the book we learn that she first encountered addiction at an early age, having seen her older sister develop a habit and witnessed her parents struggles to support their child and help her stop. Besides her very personal account, Aron also includes some well researched information on the history of addiction and codependency, discussing such topics as the Temperance League , from which the book gets its eye catching title, to peer support groups such as Al- Anon. A lot of time is spent on the roles of women and the dangers posed by traditional gender roles such as the pressure to be the ” good ” daughter/ wife / mother etc which take something pure and twist it into a destructive force.

I went into this book thinking I knew what to expect and came out of it feeling like I was crushed, I was unable to put the book down while reading it and didn’t stop thinking about what I had read for days. Overall a highly recommended, deeply honest and personal book that people may relate to in ways they never expected, but that will resonate with them for a long, long time.