Harry and Meghan and the Making of a Modern Royal Family

As with many people, I have had a slight fascination with the British Royal Family. So when Finding Freedom was released, I was curious on what could possibly be said about such a young couple.

This book was written by two journalists with no input from Megan and Harry or any of the Royal family mentioned in it’s pages. As I was reading, it became clear that it is just a retelling for what has already been reported in the press, the tabloids and rumors that have circulated over the last several years with nothing to really back it up or add to the Megan and Harry’s story. ( Though I am sure that some may like to have these stories connected in this way for reference material.) 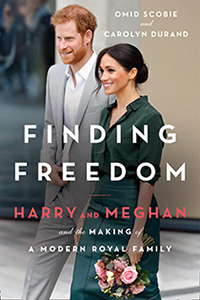 And since so much of this book is based on rumors and tabloid material, it does little to correct any misconceptions on how Megan adjusted to her new life or how those in the Royal family welcomed her in ‘The Firm’. Prince Charles and Megan’s mom seem to be the only two that were not treated as harshly by the retellings. The Queen only fared OK by the authors, mentioning that the Queen really likes Megan but is not allowed to show it because of Royal protocol with the potion of Megan in the hierarchy of the family, justifying the Queen appearing to be more friendly with Kate MIddleton in public. Based on the resources that were used, Prince William and Kate were made out to be standoffish and snobbish while Megan is a gold digging social climber and Harry may have some PTSD or other mental issues from his time in the military and unresolved trauma from Diana’s death. This is just how I reacted to how their parts were written.

From thinking about how this was written by a journalist, as I was finishing the book, the British press seemed focused on trying to make Megan and Kate out to be the new Princess Diana and Sarah Fergason, as the best of friends in every way as well as sisters in law raising their children together as a great extended family. But then as Harry and Megan began to separate from the Royals and their formal duties, I had the impression that the press began to shift and try to equate Harry and Megan’s story to be this generation’s King Edward VIII and Wallace Simpson. (King Edward VIII abdicated to marry Wallace Simpson in 1936 though this is not directly mentioned in the book, Harry is giving up a great deal for his marriage to Megan just as King Edward VIII gave up a great deal to marry Wallace Simpson)

As for the title, it does not seem to fit, no matter how much the authors tried.. Though the Royal family has changed greatly since 1936, based on Harry’s position in the family up until his marriage to Megan, I doubt that they could ever really find the type of true freedom that is implied that they are looking for. Just as it never seemed that King Edward VIII and Wallace Simpson ever found true freedom from being part of the British family after his abication.