Paul Auster - The Music of Chance

“The Music of Chance is Paul Auster’s unsettling tale of chance, gambling and rootlessness, Kafkaesque and quintessentially American at the same time.”

The Music of Chance is a novel by Paul Auster that tells the story of Jim Nashe, a Boston fireman who loses his family before gaining a fortune and taking off on the road.

As the novel opens, Nashe is on the road:

“For one whole year he did nothing but drive, traveling back and forth across America as he waited for the money to run out.” 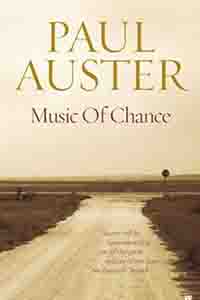 His wife has left him, leaving a note he can’t read because it was left on a wet surface, and his two-year-old daughter is living with Nashe’s sister and growing increasingly distant from her father. Nashe’s own father had abandoned him, but comes back into his life in death by leaving his children a large sum of money. It is this that Nashe is spending as he drifts across the country in his new red Saab 900.

One day Nashe picks up a bedraggled and beaten young gamble, Jack Pozzi. The two throw in together, hoping to make a killing with Pozzi’s poker skills and Nashe’s money. They set off for a game against two millionaire lottery winners, Flower and Stone.

And then things start to get strange.

I’d tried to read The Music of Chance before and stopped at that point where it deviated from what I thought it would probably be – a road novel, a gambling novel, a self-discovery novel… – and became what Wikipedia tells me is an “absurdist” novel.

I continued this time, and I’m glad I did.

Absurd is the word though. The Music of Chance frees itself from the bounds of plausibility to become something else. I’m not quite sure what. In its own world, though, it is credible; characters, situations, dialogue, all ring true inside a somehow ridiculous whole.

Paul Auster’s a renowned novelist and translator. So if you’re expecting good writing you won’t be disappointed. It’s quite a spare style though: very matter of fact, procedural almost (and I’ve read Auster’s other work touches on crime fiction). This straight-ahead voice makes the shock and horror (and there is real horror in this strange story) stand out and jar the reader even more.

I enjoyed and was challenged by The Music of Chance. I have some of Auster’s other novels on my shelves and I’m looking forward to reading them in time.