Behind the Wheel With a Pro Cyclist

“Hurtful in its telling of unwelcome truths yet powerful in its capture of what it takes, legally and illegally, to compete.”

Paul Kimmage’s diary and description of the grimmer, prosaic, desperate, and downright sleazy aspects of professional cycling ought to have received a great deal of press, but there is a strong sense that the cycling world isn’t interested in vindicating one of it’s own. If you’re looking for the flashier, reality-television seamy underbelly of professional cycling and the organized doping of Lance Armstrong, et alia. (i.e. Sopranos with bikes but less outwardly-directed violence) that has been covered at length already, this is not the book for you.

There are plenty of other books far more appropriate for that kind of Schadenfreude. Kimmage offers readers here the more mundane; and therefore, even more bleak corruptions of the sport: brutal exploitation, dreadfully incompetent directeurs sportif, constant and exhaustive fear, and most heartbreaking of all…merciless disillusionment. This book is for those who love cycling, but are grown up enough to realize why professional cycling can and should never be uncritically idealized. 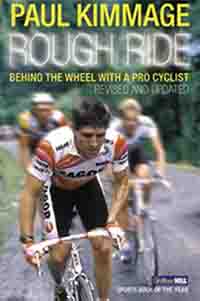 It took me a remarkably long time to read this book, despite it’s importance because it is very detailed, and the details of true professional cycling are decidedly less glamorous (i.e. almost insanity-inspiring ennui here) than the race coverage would have one believe. Rough Ride is also a remarkably genuine warning for those parents whose children are competing at an elite level in any sport. After reading a number of books concerning drugs in sport, particularly cycling, I find it interesting how little vindication has been accorded people like Paul Kimmage and David Walsh. It indicates strongly that despite the confessions of Lance Armstrong, Floyd Landis, Tyler Hamilton, David Millar, etc., that people are still deluding themselves. Sports and sports reportage are simply going to repeat their willing gullibility of the past, so that arm-chair, fill-in-the-blank sportspeople can have their cake and become obese and diabetic while eating it, sitting in front of the phoney heroes (engaging in equally unhealthy practices) on television.