“If love and war are two of the greatest themes in literature, they’re both here. . . . McLain’s dialogue, is, as Hem might say, good and true.”

This is the author’s second novel involving a wife of Ernest Hemingway, and this time it’s the story of Martha Gellhorn. Just like The Paris Wife the story is told through the eyes and experiences of the wife.

Martha Gellhorn is a fascinating figure, a war correspondent and writer just like Hemingway, who meets Hemingway in a bar in Key West and ends up following him to Spain to cover the civil war. The story of their relationship as it evolves during that war is terrific, and once they become a married couple, we see it slowly come apart, again around a war, this time the Second World War. 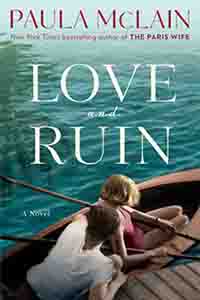 Our insights into the personality of Hemingway are right on. We can feel his charisma, his tremendous talent, and his own need for constant love and attention which helped form all his attachments to all his wives. But Gellhorn was different from the others. Always her own person with her own budding career she could stand on her own two feet, and this allowed her to achieve all that she did in her lifetime.

An excellent partner to The Paris Wife, I highly recommend this book.