“Sensational – the best what-if thriller since The Da Vinci Code.”

I had no idea what this novel was about when I picked it up in Asda for £10, the name Peter James on the front cover was enough. When I got it home and read the blurb it stirred a few doubts in my mind. A journalist, Ross Hunter takes a phone call claims that the caller has absolute proof of the existence of God. Really? Yes, really! That phone call and the follow up meeting with the caller sends our hero on a chase to various places in the UK and abroad to get to the true. Of course James doesn’t make it that easy does he, oh no …

Hunter had volunteered to cover the war in Afghanistan; his experiences shook him to his core. Out on a patrol, his unit came under fire that caused heavy casualties, including one of his personal friends. Ross himself was shot but survived, the resulting evacuation and treatment left him with PTSD. After being discharged from hospital he, he arrived home to be given another shock. Eventually he got back to work writing for various newspapers, always on the look out for that one BIG story, the one that make him a household name, just like every writer working today. But was this phone call his BIG story. 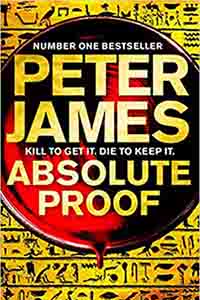 He agreed to meet the caller and the meet happened in Hunter’s home. What he learned that day from Dr Harry F. Cook didn’t inspire him all that much however, he did agree to read the manuscript that his visitor gave him. It was clear that Cook was terrified of the information he held but was extremely sincere in his belief of what he said. Hunter began reading the manuscript and found it very hard work, but he had made a promise so he kept at it. A few days later he took another call from Cook and made a second promise, this time to visit Cook at his home. All Hunter found Cook’s dead body, clearly the victim of a murder.

That death convinced Hunter that he was indeed onto a big story and he knew at that point he had to carry on with it. An interview with a friend, an Anglican bishop ensued who voiced caution and pointed out some of the dangers involved in such a story. An interview with Arch Bishop of Canterbury, gave him a more positive feeling, along with another word caution.

Hunter began to wonder as to who could be interested in actually preventing the story seeing the light of day? Obviously, top of the list is the Christian Church oddly enough. But why would they try to prevent it becoming known, but would they go as far as killing Cook to do so. Hunter didn’t think so. Even so, those who were interested were massing against him and would do anything to stop him publishing or getting their hands on what information he had.

OKAY, I do have more interest in the novel than just being a Peter James fan. I am also a Christian, existence of God is an act of faith for me so it would not deepen my faith in anyway. Allow me a question please? If such proof did come to light, would it encourage you to believe, in a deep and meaningful way anyway? I think not. Some might do so, but humans are proud and would resent being proven to be wrong.

When I did become aware of the story-line, I did hesitate about reading it. However, I did read it, obviously and enjoyed it too. Now I’m wondering if there is a possible TV or film contract heading James’ way.