“Stretching the parameters of the genre, [Runaway] is as much a disquisition on friendship and the fragility of dreams as it is a thriller.”

This book is yet another 3 for a fiver offer from The Works. I had thought the writer was a new one for me but according to my list I have another of his; whatever, Runaway is a terrific read and well worth the effort to find it.

The story moves back and forth between 1965 and 2015, telling the tale of fortunes of a small band.

A group of four Glasgow school boys and an older friend, decide to form a rock band, and things are going well until Jack gets in trouble at school. On that day he decides that he has had enough of life in Glasgow and tells his four friends he is off to London. One by one they all decide that they are going with him. 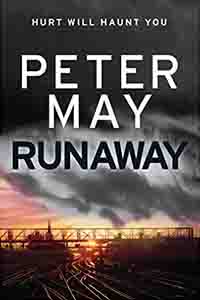 Each of them has their own reason for heading off with him. One of them has an alternative reason however, and before long there is a sixth member to the group. After a series if misadventures on their trip south they finally arrive in London and fall in with the wrong man, who promises work and place to live, but it comes with a price.

The second stream of the story is the up to date story of three of the boys. Now grown men and all retired they set out to return to London with Jack’s grandson, an unhappy 26-year-old, in his car. The three men think it’s a good idea to follow their previous route and off they go. However, things don’t go well and yet again they arrive in London in a way they had not expected. They are met by one of their boyhood friends who helps them to move on with the story. The story continues on and all the questions that were left on their leaving of London, and the story does not end until the very last five-word sentence.

Runaway was an easy read for me and I would certainly advise others to buy and read it. I shall also be looking for more of his books too.