“Just as quick-moving and unputdownable as The Golden Compass. . . . The mysteries deepen and the wonders grow even more extravagant.”

The Subtle Knife is the second book in Philip Pullman’s His Dark Materials trilogy. In the previous book, Northern Lights, we are introduced to; Lyra, Daemons, and Dust.

While Northern Lights is set in only one world, The Subtle Knife features three, Lyra’s world (from the first book), Will’s world (a world very similar to ours), and another world similar in some ways but like Lyra’s with some unique differences.

At the beginning of The Subtle Knife we are introduced to Will, an integral character in this part of the series, Not only does this grip the reader early on with some mysteries surrounding his life it also gets the reader waiting to find out the fate of Lyra after leaving her at the end of Northern Lights. 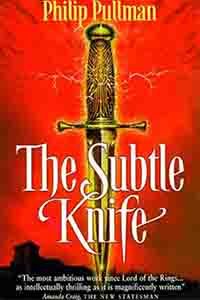 Like Northern Lights, The Subtle Knife is gripping, action-packed, intriguing and beautifully written. It also continues to explore deeper ideas of consciousness, self-identity, family, and friendship. These themes which run throughout the novel allow the reader to relate to the narrative despite the strong fantasy elements of witches and other strange happenings and beings.

Having now finished parts one and two of the His Dark Materials series I am looking forward to reading the final part of the series, The Amber Spyglass, and also the first in the prequel series the author is now releasing, The Book of Dust – part one, La Belle Sauvage.