This was the first steampunk series I’d tried so far. And I quite liked it!

The span of the story across the four books is very well written. Even the sixteen-year gap between the second and third books doesn’t seem awkward.

Set in a post-apocalyptic world where cities are machines moving on wheels across the land, the story follows a young boy named Tom Natsworthy, a girl named Hester Shaw and a “stalker” known only as Shrike.

All of the cities are caught up in a race to become one of the world’s biggest. The story is neatly woven with love, politics, betrayals and some really good steampunk elements. 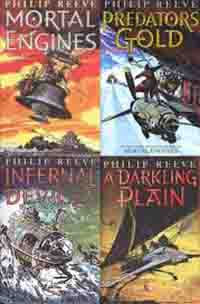 It has a bit of everything: moving cities that “eat” other cities, airships, killer cyborgs and…well, I don’t want to give too much away here! It has a bittersweet ending, you’ll have to brace yourselves a little towards the end.

Recommended for people who like steampunk, sci-fi and fantasy.