Preeti Gill - She Stoops to Kill

Stories of Crime and Passion

“a series of stories that deal with the domesticity of disposal – ridding oneself of an inconvenient husband or lover or getting rid of someone who is threatening to take back a vital gift.”

Most murder mysteries are about men, writes Preeti Gill in her introduction to this anthology of crime. Most of the murderers are men too and she finds the gender discrimination intolerable. This despite the fact that Lizzie Borden is notorious for hacking her parents to bits with her axe and Madeleine Smith escaped hanging because her arsenic poisoning case was returned ‘not proven’. Women have murdered over time, including Catherine de Medici and Lucrezia Borgia however, yes, no one has written books about serial woman murderers, though women in India like Madhulika Liddle, Madhumita Mukherjee and Kalpana Swaminathan are writing murder mysteries. 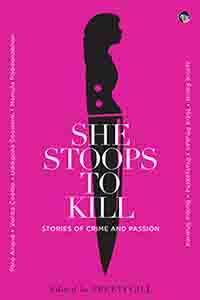 Of late there has been an exploration of women gang lords and serial killers in India and this book follows that path. Gill has brought together a mélange of writers and given them the task of creating believable murderous women. The result is a series of stories that deal with the domesticity of disposal – ridding oneself of an inconvenient husband or lover or getting rid of someone who is threatening to take back a vital gift. This anthology plays the variations on the symphony of murder. There is something judgmental about the title of course which was not the case with ‘She Stoops to Conquer’. A woman stopping to murder has something low about it, though quite obviously that was not intentional.

As Gill says in her introduction, the plots are shy of gunplay and delve into the psychological depths behind the murder. There is knife work, manipulation and poison and quite often, she who stoops does not lift a finger but gets a rather stupid male to do the dirty work for her.

Janice Pariat’s and Paro Anand’s stories have a now you see it now you don’t quality to them with an undercurrent of doubt – was it, or was it not? Bulbul Sharma’s story is deft in its detailing, though the identity of the murderer is rather obvious, as perhaps it was intended to be.

Mitra Phukan brings the rivalry of the classical music world to the fore, while Uddipana Goswami explores a young man’s gradual realisation of a murder. Pratyaksha describes the death of another glamorous victim and Manjula Padmanabhan delves into the mind of a serial killer who seems perfectly ordinary in every other detail.  Venita Coelho’s Sister has a transgender who the bosses a slum and allows no low business in her area which puts a twist on the she factor, though there is a woman behind the killing hand.

She Stoops to Kill can be compulsive and meditative by turns and is bound to be the perfect companion on flights and train journeys adding a chilling edge of the unfamiliar.