“The book is interesting not only the enlistment of folktale collection-sources but also attractive to elaborate related-descriptions.”

Since prehistoric times, the material richness of India has invited the attention of many different groups of people: the Aryans, the Mongolians, the Greeks, the Central Asians, the Persians, the Arabians, and the Europeans. The result has been a great and a complex intermixture of culture, blood and ideas. Thus there originated a lot of comingled-tales in the area.

The cultural riches of India were captured in the eighteenth and nineteenth centuries by the civil service officials and missionaries who went beyond the calls of their respective duties to record the folk materials of the people among whom they lived and worked. Quite surprising! This is attractive too. 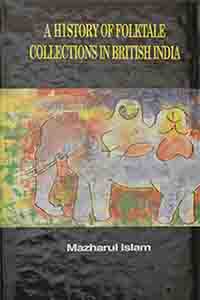 The British, who came to India in 1757 to trade, became rulers on account of their fortune and shrewdness. But behind this, majestic and enriched collections of local folk tales were performed by those administrative officers at regular interval that the book “A History of Folktale Collections in British India” deals with.

Dear readers, this book deals with the Indian folktale collections made by the British civilians, their relatives and the European missionaries during British rule in India. The book contains three chapters: First Chapter: The Role of British Civil Service Officers and European Missionaries in India; Second Chapter: Folktale Collections of European Civil Servants and Missionaries in India and the Third Chapter: Outstanding Collections of India Folktales by European Collectors. There are two appendices in the book comprising: Contributions of American Scholars to the Study of Indic Folktales in The Twentieth Century and The Modern Development in The Study of Folklore.

From the first chapter, we come to know about Mrs. Marianne Postans, who was not a government official, but was closely related to an administrator. One of her references to John Fitzgibbon, late governor of Bombay suggests that she was known to the governor. Her book Cutch (London, 1838) was based on excellent fieldwork. Cutch, a small area of Western India, largely populated by Hindus, are said to have delighted to hear the deeds of their ancestors sung and rehearsed in ancient story. From writer’s reference, we come to know that Postans also included some tales-such as The Romance, of the marriage of love and beauty, Trust in God and a tale of a traveler and a snake from literary sources. The chapter also impresses us by giving the impression “for all oriental families are addicted to narration and seldom close the day without one or other reciting some passage from the records of their own lives or the traditions of their forefathers”

We also face one of the earliest contributors is G. H. Damant, a Britisher, who continued publishing  folktales in its first, second, third, fourth, sixth, and ninth volumes. The writer informs us that Damant’s collections are the first Bengali folktales brought to the notice of the West. In juxtaposition, we also face Mr. Dalton, both of them are entitled to the ‘pioneers’-one as a Bengali folktale collector, the other as an ethnologist of Bengal.  The second and third chapters portray so many names of folktales that highlight the scholastic aptitude of the writer: Professor Mazharul Islam, as well as His versatilities upon this sort of creation. If we go through William E. Marshall’s The Todas (Todas: a prominent tribe in South India) (London, 1873) we shall come to know that it is one of the earliest ventures of folktale collections. From this chapter, we come to know that Marshall’s collected “Story of Frog” is mentioned by Shakespeare in “The Lushai Kuki Clans”, so interesting!

As a whole, the book is interesting not only the enlistment of folktale collection-sources but also attractive to elaborate related-descriptions. It is the writer who informs us that the different types of folktales were collected by the interested scholars and were translated by them in English and published either in the form of books or articles. The analyses have been made on the basis of the brilliance of the collections and interpretations collected from various sources. A rich bibliography will focus on the laborious and devoted attention of the author towards His task. In a quotation, the writer does not forget to give credit to the British by saying: “These and other products of the white man’s burden transformed India in complex ways which are worth examining closely before making flat statements as to whether British rule helped or hurt India”

The book was first published by Research, Folklore and Compilation Department in February, 1970 of ‘Bangla Academy’ and the price is BDT. 150.00 only.