Rachel Kadish - The Weight of Ink

“Like A.S. Byatt’s Possession and Tom Stoppard’s Arcadia, this emotionally rewarding novel follows […] present-day academics trying to make sense of a mystery from the past…Vivid and memorable.”

Just finished The Weight of Ink by Rachel Kaddish.  This is an historical novel that takes place in the 1660’s and the year 2000, both in England. The story revolves around 2 women.

Helen Watt is a historical researcher approaching retirement age.  She is the person who is called to an old English home just outside of London, where important papers have been found hidden in a very small walled off closet.  These papers will concern a Jewish Rabbi and his correspondence with other Jewish leaders in other cities in Europe. 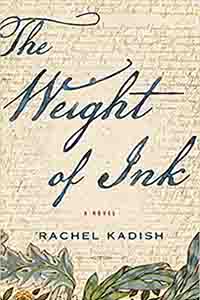 London has opened itself up to the return of the Jews since their banishment, and although they are still not widely accepted, they can for the most part live peacefully.

The other major character is Ester Velasquez, a young Portuguese Jew, who along with her younger brother have been sent to London to live under the care of the Rabbi because of the death of both their parents in a recent fire. The younger brother was supposed to scribe for the Rabbi, who was blinded during the Spanish Inquisition.  He has come to London to help the Jews settle their once again, and to teach young Jewish men.  But the brother wants no part of it, so the Rabbi selects Ester to be his scribe.

She has been educated, is very bright, and is persuaded to do the task. But women are not supposed to be allowed to do this so the Rabbi is using Ester out of necessity. No one but those in the Rabbi’s household know who is writing these letters.
The story revolves entirely around the correspondence. The book goes back and forth and as the papers are translated and analyzed we are re told the actual story of Ester and the Rabbi.

There will be many discoveries as the letters and story unfold. There is the competition and jealousy amongst the historians reading the letters, and the race to find the true story, to publish first, to find the secrets the letters hold.

At 560 pages the book is a bit long but my interest never wavered. Ester is such an interesting character, you will look forward to the chapters which tell us about her life and that of her loved ones.  Ester is so much more than she appears to be, and as we slowly discover her story the book will come full circle, to its final chapter.