Raza Mir - Murder at the Mushaira

“Murder at the Mushaira goes beyond the purview of a murder mystery to explore the scenario before 1857 exploded on Hindustan and put an end to Mughal rule and any hope the country had of freedom.”

Raza Mir has crafted his own take on murder in an imperial atmosphere –the doomed Delhi of Bahadur Shah Zafar, with the British waiting to put an end to Mughul rule and take over the country. The background is not the setting of a rich Nawab’s haveli, thought that is where the murder takes place but a seething of conspiracies and counter conspiracies with the British as the villains of the piece and with a very unlikely detective, Mirza Ghalib. 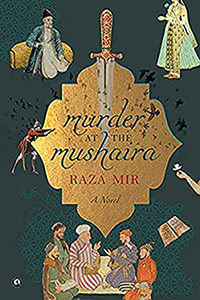 Ghalib’s writings tell us that he was present in Delhi and saw all the horrors of the 1857 uprising, the festering bodies, the numerous cruelties, though his detective qualities are fictional. Mir throws in a Hindu scientist who studies forensics to act as the Watson as the piece. We know Ghalib existed, so did Master Ramachandra, the scientist, and that the two knew each other. However, Mir draws his own relationship from that essence of historical fact as he does with many of the other characters including that of Mohan Lal Kashmiri. British characters like Burnes, Fraser and Vibart who existed have been given personalities to suit the text and would take a historian to declare that the characterisation was sheer libel. Mir mixes his characters to give the reader a feel of the variety that abounded in Delhi and the relationships between the religions and between the echelons of nobility at the time.
The subtitle ‘A Novel’ tells us that Mir does not intend the story to be taken as your typical whodunit. He has put a great deal of research into it, looking up the authentic mushaira set up and recreating the atmosphere of Delhi in 1880’s by going through relevant texts of the time. As the narrative unfolds it starts with the wounding of a rider in the night, progresses to the discovery of a dead poet in the morning after the mushaira and who might benefit from the sale of the new Lee Enfield rifles greased with suspicious fat.

Murder at the Mushaira goes beyond the purview of a murder mystery to explore the scenario before 1857 exploded on Hindustan and put an end to Mughal rule and any hope the country had of freedom. In the end it is a work of imagination and research and makes its own contribution to one of India’s – and possibly the world’s – favourite genres.