“Fans of The Handmaid’s Tale will be instantly hooked… Maternal Instinct asks questions about humanity’s final destination if we continue down society’s current path of no real support for working parents.”

The year is 2040 and in Australia society has moved on in a very surprising way. Through a change in social policy young women are now expected to give birth twice in their late teens and early twenties, then hand the babies over to professional “Maters” and “Paters” whose function is to raise these children in small group homes. If the birth mother wishes, she can spend time with her children on Sundays, but if not, she can carry on with her life and career, secure in the knowledge that they are being well cared for. 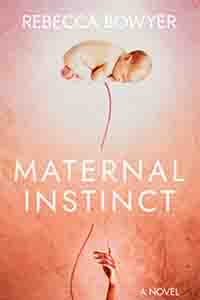 This policy has been in effect for almost twenty years, and has evolved in such a way that now parents are being genetically matched and the resultant embryos screened before implantation, something that is causing some concern among the general population. No child lives in poverty and every child is safe, but what are the real costs, and who is really paying them?

This book follows the stories of two women , Monica and Alice. Monica is nineteen and is one of the mothers in the program, having recently given birth to a son, Oscar. Dreaming of a career in science, she never felt the desire to have a family, but as the time to surrender her son is drawing closer she is beginning to have second thoughts and turns to her mother, Alice for help.

Alice is one of the earliest products of the new social system, and is now a big wig in its organisation, but she is about to make a discovery that will shake it to its very foundations, and leave her with some very big decisions of her own to make.

I found the central premise of this book fascinating but I do wish that more of the focus had been on the initial implementation of the reproductive program and how the Australian society as a whole was convinced that it was a good and necessary idea. This feels like a missed opportunity, and would have added an interesting dimension to the story.

Both of the central characters, Alice and Monica, were sympathetic for different reasons, and several of the secondary characters were really well executed, most notably Ellie, a young girl cared for by Alice’s husband Oliver, a Pater. I found the ending just a little rushed, but there does seem to be potential for the author to revisit this dystopian future, and if she chooses to do so, I will be eager to see where she takes it.