Renée Knight’s, The Secretary is an exciting new thriller which explores the “dangerous line between loyalty and obsession.” Knight’s début novel, Disclaimer is a thriller that sets up this simple yet chilling premise, “Imagine if the next thriller you opened was all about you.” Her second novel, The Secretary is a thriller of a different sort, revolving predominately around secrets, deception, and fraud.

“Secretary: [a] person entrusted with a secret”, which is exactly what Christine Butcher is. Employed by Mina Appleton for Appleton’s supermarkets, Christine runs every aspect of Mina’s life, from organising her diary and interviewing nannies for her children to predicting her employers every need. Christine is always there, pouring drinks, ordering in food and ensuring Mina’s life runs smoothly, almost invisible in the background but an ever-present figure. The plot revolves around these two female lead characters, both very strong in different ways. While neither could be described as role model material, they are well-written, enigmatic, and curious characters that definitely pass the Bechdel Test. 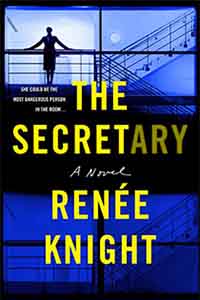 The book’s narrative is told by the secretary, Christine Butcher, in the future as she pieces together the shards of deception from Appleton’s in the past until the story catches up with the electrifying present.

Starting right at the beginning, when Christine was first employed, the story appears relatively light to start with. Soon, however, more and more secrets are revealed and unravelled, drawing the reader into the dark mysteries of Christine’s life. In an ever-increasing crescendo, the story builds up and up towards an edge of the seat climax that hooked me so well that I genuinely couldn’t put the book down, having to take it out with me when I left the house.

The book’s short chapters, fast pace, gripping plot, and unique take on the genre itself makes this book a truly thrilling and brilliant read. Alongside the début novel, Disclaimer, I have not been disappointed by anything Renée Knight has produced, so I am looking forward to seeing what else she brings us in the future.