The Quickening by Rhiannon Ward is a Gothic mystery with a ghostly twist, Set in the aftermath of World War 1 , the book follows a photographer Louisa Drew to a crumbling mansion in the English countryside where she has been commissioned to photograph the contents for an auction, the proceeds of which will fund the straitened family’s planned move to India. Widowed during the war, and mourning the deaths of her twin sons in the Spanish Flu epidemic that followed, Louisa craved a family and stability, and settled into a marriage with the rather conservative Edwin , and despite knowing that he will not approve, she accepts the job since the imminent arrival of her new child will further stretch the already tight family finances. From the moment of her arrival at Clewer Hall she feels like something is not right, and when she learns about a mysterious seance that happened in the house in 1896 ,where the family was apparently cursed her sense of unease only deepens. A plan to recreate the infamous night and bring back as many of the original participants as possible does little to allay her fears , and the events that come to pass set her on a course to uncover the secrets of the past, but at what cost? 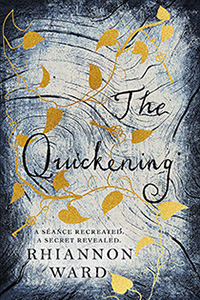 I loved the setting of this book, the author does a fantastic job of creating a sense of time and place , that strange period between the wars where the class system was starting to break down and so many of the large estates that dotted the country could no longer survive. Clewer Hall was so vividly described that it almost felt like a character in its own right, it was the perfect setting for the deliciously creepy story that unfolds. The post war setting also added an element of tragedy which was highlighted not just by Louisa’s losses but by the deaths of the three sons of the house, which could be seen as the “curse” at work.

The majority of the book is written from Louisa’s perspective thought there are brief chapters set on the night of the original seance interspersed throughout, and eventually the two narratives combine to reveal the truth of the mystery that lies at the heart of the book. Since so much of the story is focused on Louisa, it is important that the reader can become invested in her and her story, and I have to say I really did find myself caught up in the drama.

There is a real sense of tension throughout the book, an ominous feeling that the author has done a wonderful job of building from the early stages of the book to the decidedly dramatic crescendo. All the expected cast are present and correct, the Butler, the loyal Housekeeper, the gossipy maid, the spinster daughter, and of course the mysterious ghost-like child who appears in the gardens, and adds the necessary supernatural touch. The ghostly element of the story is nicely worked into the overall narrative which moves at a surprisingly fast pace, thanks to both the short chapters and the feeling of a countdown to the arrival of Louisa’s baby.

I found only one real flaw with the book, the author introduces a romance plot line which seemed rushed, unlikely and completely unnecessary , and I feel the book would have been much stronger without it, but over all I really enjoyed it as a nice addition to the genre.