Rick Riordan - Magnus Chase and the Ship of the Dead

“While Ship of the Dead is action packed with exploding heads and garroted giants and deadly and divine thrills a minute.”

The third of the Magnus Chase adventures takes the son of Frey in hot pursuit of Loki accompanied by his friends in an attempt to stop Ragnarok being launched. Loki has escaped from his chains and us setting sail on the ship of the dead, Naglfar, manned by an undead crew, If he succeeds, the Nine Worlds will be destroyed by Ragnarok.

Riordan sticks to the trend of his previous Magnus Chase books with a wolf on the rooftop and a mysterious message from Magnus’ Uncle Randolph which is supposed to help him track Loki down. 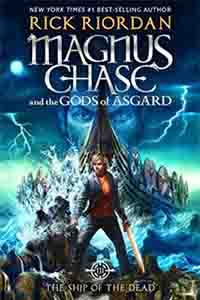 Magnus has his gang of friends from Hotel Valhalla to help him and a banana yellow Viking longboat courtesy of his godly father. Riordan also deftly introduces a transgender character, Alex who is an agr or shape shifter, an inheritance from Loki but which involves ego problems and confusion as most young adults are discovering today even as transgender support is trending. To add to the confusion, Magnus has a massive crush on Alex in her she guise.

There is also the Muslim daughter of Loki, Samirah, who is fasting for Ramdan while helping fight off giants and tame water horses and defeat her father’s evil plans. For Magnus Samirah’s fortitude is an eye opener. She believes in an Almighty God while being the daughter of a Norse myth god and despite being a Valkyrie manages to tackle her different worlds with a hijab on her head.

For the first time Riordan reveals his other literary sources – Tolkien and CS Lewis when it comes to the matter of the Alderman, Hutch’s father, transformed by a cursed ring into a dragon. The ring is garroting the flesh on a finger that was a human being’s to begin with but which is now dragon sized and too large to accommodate the ring. CS Lewis does a similar thing in the Voyage of the Dawn Treader with a bracelet too tight for the arm of a boy turned dragon.

While Ship of the Dead is action packed with exploding heads and garroted giants and deadly and divine thrills a minute, perhaps Riordan’s ending loses a little of its expected oomph, bad puns and all. But that is up to the Magnus Chase fan to decide.