“A classic English crime mystery steeped in the atmosphere of London “

I’m not a big fan of crime fiction, and I have to admit that before J.K Rowling was exposed as Robert Galbraith, I had no desire to read the Cuckoo’s Calling and actually hadn’t even heard of it. So yes, I’m one of the bandwaggoners, because I really am a huge fan of hers, but despite it sitting on my shelf for a few weeks, I have only just got around to reading it.

If a book can be judged on its readability and the likeability of its characters, then the Cuckoo’s Calling really is a winner. Cormoran Strike is ex-army, a private detective running a failing business and trying to control his failing life when he is called in to investigate an apparent suicide. On the way he picks up an efficient temp, Robin, who he neither wants nor has time for, and a whole lot of trouble. 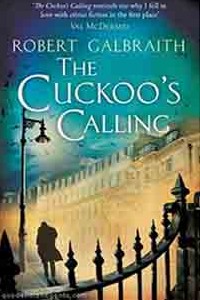 The story is beautifully woven, and has all of the excitement and flow that the Casual Vacancy lacked. As mentioned, I’m not a fan of crime fiction, so I can’t compare the Cuckoo’s Calling to other books in the genre, but I absolutely loved it. 48 hours from beginning to end in my busy life is a fair indication of a good book, and I thoroughly enjoyed every page. There are no dull spots here, it’s action-packed, twisty turny and very interesting and believable.

I had an inkling whodunit fairly early on, I won’t say where in the book I realised as I don’t want to spoil the story for others, but I was correct in my guess. I worried that I would feel disappointed if I was right, but in fact the story wound up in perfect harmony and was a very enjoyable tale indeed. I hope this isn’t the last we’ve heard of Strike and his sidekick Robin!