“Robert Olmstead gets better with every book. If you know all of his previous books, you know how startling this fact is, and how startlingly good this writer is.”

This is a novel of the old west, and it’s historical setting is during the great buffalo hunts which almost wiped out the entire buffalo population, and destroyed the Indian way of life. David and Elizabeth Coughlin own property and a business which is failing.

David has been researching going into the buffalo business. The price of hides and meats are going through the roof. But before he can begin, he is killed by his own horse in an accident. 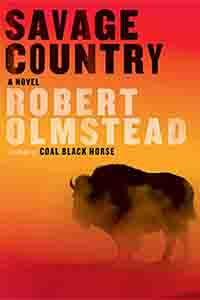 In the meantime, his brother Michael who has hunted and captured game worldwide for Zoo’s and for museums has responded to his brothers invitation to visit Michael arrives shortly after David’s death.

He pays off David’s debts, including a debt owed to a Mr. Whitechurch who holds a lien on the Coughlin property. Whitechurch is not pleased with the payment as he coveted the property and he felt it soon would be his.

Elizabeth asks Michael to take over the buffalo business, which he reluctantly does. The main part of the story then begins to unfold. The trek to hunt the buffalo will go through Indian lands. The group will battle prairie fires, floods during great storms, Wolves who also track the buffalo for food.

Men are hired to help and they, along with other men who already worked for the Coughlin’s will make up the team that will attempt to do the job. Some will quit, being replaced by stragglers along the trail and some will just abandon the work. All the dangers are there , including strangers on the run, rabies, all the elements due to the change of the seasons, and the Whitechurch people, who may not be willing to accept losing that which they so coveted.

At 293 pages it is a quick, exciting read. Olmstead is a very good writer. This is the fourth book I have read by him, and I think it is his best. It has already been named by Amazon of one of its top 100 books of the year.