Robert Ryan - Death on the Ice

“Bestselling author Robert Ryan brings one of the greatest epic journeys of all time to life in this captivating story of Captain Scott’s last Antarctic expedition.”

Robert Ryan’s “Death on the Ice” is a novelization of Robert Falcon Scott’s attempts on The South Pole.

In 1901, his first – “The Discovery Expedition” – achieved the feat of “The Furthest South” – just beyond 81 degrees, but he was beaten back by appalling weather before he could reach his ultimate goal.

The 1911 “Terra Nova Expedition” won Scott his immortality. He and four companions reached The Pole, but died on the return journey, barely a day’s march from salvation. 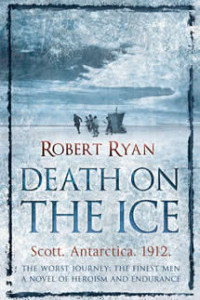 Scott’s reputation has waxed and waned in the 100 years since his death. Initially lauded as the archetypal heroic Englishman, he has more recently been portrayed as a hapless incompetent. Even more recently, biographers (such as Sir Ranulph Fiennes) have returned to the man’s defence. Robert Ryan takes a fairly even-handed view of the man in this dramatization. He is neither hero nor fool, rather a relatively ordinary man driven to extreme undertakings; flawed in some ways, resilient in others and, ultimately, as much a victim of bad luck as of his failings.

“Death on the Ice” tells the story from the points of view of Scott’s companions and colleagues as well as his own; chiefly Ernest Shackleton, who accompanied Scott other first expedition and Lawrence Oates who died on the second. Again, Ryan steadfastly avoids the veneration of men who have been greatly lionised since and, as a result, presents us with a story that reads realistically, believably and sympathetically.

It is, nevertheless, a gripping read. Ryan’s description of the terrible privations suffered by the polar explorers is deeply compelling and I struggled to put the book down. It’s well written as a novel; Ryan is a prolific and accomplished novelist and it is clear that he researched his subject well enough to write with some considerable authority. Of course it remains “only” a novel, but, if of you know little or nothing of Scott’s adventures, you may well be tempted to seek out his more authentic biographies.

A highly recommended boy’s own adventure.