Robert Webb - How Not to Be a Boy

“Webb’s comic voice pierces even the darkest moments of his life, but the strong reviews How Not To Be A Boy received after its U.K. publication last fall suggest that he does some heavy lifting here as well.”

English comedian, actor, writer, and one half of Mitchell and Webb, Robert Webb has written an autobiography, which covers every aspect of his life, from his childhood and his time at university in Cambridge’s footlights to his adult life and career.

How Not to be a Boy is more than just a biography though, Robert Webb uses his own life and experience to examine gender, masculinity and other feminist issues. The book is broken up like a play into the “overture” – introduction, “Act One” and “Act Two” to reflect Webb’s acting career. Within Act One, each chapter title begins with “Boys…” followed by a stereotypical ideology while in Act Two, these stereotypes are prefaced with “men”, for example, “Boys Don’t Cry.” 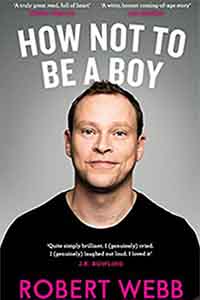 Through his own experience and the men around him, including his father, brothers and friends, Robert Webb portrays how boys and men are socialised into ignoring their feelings to protect their masculinity, this, Robert Webb explains, means men often end up expressing all their emotions as anger rather than the real emotion they are feeling.

Robert Webb’s life portrayed in this book also highlights the struggles of growing up that many readers will be able to relate to including; ideas of sexual maturity and exploring sexuality.

Webb also discusses more difficult topics including, his father’s violence toward his mother and brothers, the loss of his mother, his exam failure and the dark suicidal thoughts he struggled with. Through his humorous and self-deprecating tone, however, Webb successfully makes these topics light enough while still holding onto the seriousness of each matter. This open and honest discussion also shows readers that mental health is an important matter that we should be talking about more.

A great read which takes you through the rollercoaster of Webb’s life and emotions in an authentic and sincere way. What’s more, the audiobook, which is narrated by Robert Webb himself, includes an extra interview with Webb’s wife Abigail Burdess and another comedian, talking about the book and some of the ideas within it. The only downside to the audiobook is that you miss out on the pictures segment in the back of the physical and e-book editions – luckily we had the Kindle book too, so once I’d finished listening I could flick through the images.